"Esteemsters" was the first episode of the first season of the Daria TV series.

Broadly speaking, the plot involves Daria's and her family's arrival in Lawndale. The major characters and conflicts that would come to play out in the series are introduced. Daria is forced into a self-esteem class when her savage wit is mistaken for low self-esteem.

The Morgendorffers have just moved to Lawndale and it is the first day of school for teenage sisters Daria and Quinn Morgendorffer, so their father, Jake Morgendorffer, drives them to school. He stresses that they may have a period of adjustment to their new surroundings, especially for Daria. Arriving at Lawndale High School, Quinn is immediately noticed and greeted by some popular girls, including Sandi Griffin and Stacy Rowe, and asked on a date by a young man (later identified as Corey), while Daria leaves the car and walks into the school without a look or comment from the other students. During the school tour by the principal, Angela Li, Daria displays her cynical side, making sarcastic comments on Ms. Li's statements.

Both girls, as new arrivals, are subjected to a psychological test consisting of inventing a story based on a picture of two human silhouettes. Quinn immediately creates a nice typical teenage story. Daria, on the other hand, gives sarcastic answers to the questions ("A herd of beautiful wild ponies running free across the plains") to the annoyance of Mrs. Manson, the school psychologist. After that, in history class, Daria is able to sum up Manifest Destiny, a task given by teacher Anthony DeMartino. Her correct answer is in stark contrast to the answers of classmates Kevin and Brittany, who say that Manifest Destiny fueled the Vietnam War, "Operation: Watergate", and/or the "Vietcong War", fueling Mr. DeMartino's wrath.

That evening, as the Morgendorffers are having dinner at home, both daughters talk about their day: Quinn is the new vice-president of the Fashion Club and has been invited to the pep squad, while Daria only makes cynical observations about her fellow students and teachers. The school calls regarding the psych test taken: Daria has to attend a Self-Esteem Class.

The following day, at self-esteem class presented by the English teacher Timothy O'Neill, Daria is confused by the expressions used. When she asks Mr. O'Neill, he refuses to explain them. Another student, Jane Lane, tells Daria that Mr. O'Neill doesn't even know their meaning and advices her to relax, further informing she has already taken the class six times. After school, Daria and Jane befriend each other as they walk home and talk calmly about self-esteem class and other topics. Arriving Home, Daria is surprised her mother, Helen is there, having taken the day off to be with her daughter, and they end up going shopping, mainly for Helen's wardrobe.

The next day, prompted by O'Neill's advice during self-esteem, Daria convinces her family to go to Pizza Forest, a kid's restaurant where singers, dressed as animals, try to join families in singing: Quinn is bored, and Jake and Helen are uneasy, but Daria seems content with the situation (it is implied that her contentment stems from her family's discomfort). 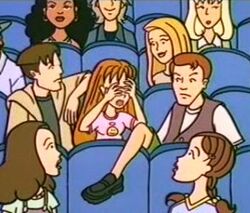 Some days later, as Daria is at Jane's, they agree to use Jane's knowledge of self-esteem exam questions to pass the exam earlier than usual, and do so during the following class, answering O'Neill's questions with upbeat and stock answers. The teacher is so impressed with the girls graduation three weeks ahead of schedule that he decides to announce it in an assembly. At the assembly, while on podium, Jane fakes sudden embarrassment and runs off stage amidst laughter from students. Daria, on the other hand, gives a small speech about self-esteem, concluding with a big thanks for her sister Quinn, in front of all their colleagues (taking revenge on earlier Quinn's statements that she is an only child). Quinn is furious Daria has addressed her in front of the whole school and, that evening, at home, she raves and dramatically declares she will lock herself in her room for the rest of the life, in typical teenage fashion. This decision, however, lasts only until she takes a call from another male student, Matthew, which immediately lifts her spirits.

Having graduated early from self-esteem class, Daria is able to convince her parents to spend even more time together: this time, they attend the UFO convention being held at Lawndale. While Daria is much at easy and Helen and Jake go along, Quinn refuses to enter the geeky space, until being contacted by Artie...at which point she runs to be with her family.

The events of "Esteemsters" are supplemented by entries from Daria’s notes, as given in The Daria Diaries. We learn:

An earlier draft of the script is available online (see links) and in it:

The calendar in the Morgendorffer house is at May 12. This would mean the school year is already well into its run, that Daria spent most of her sophomore year at Highland High, and that "Road Worrier" can take place during August as "The Daria Diaries" says it should. This, however, clashes with parts of "The Daria Diaries" which includes an assignment from March, Fashion Club entries from February & March, and diary entries from the autumn. "Depth Takes a Holiday" has to happen before October 31st, and we can't easily cram every episode between "Worrier" and "Depth" into two months...

Mr. O'Neil mistakenly calls Jane Daria after she runs off the podium. However, this is likely due to Mr. O'Neill's inability to remember names (he didn't even recognize Jane despite her having taken the self-esteem course six times).

When Daria and Jane go to meet with Mr. O'Neil after class, the bridge on Daria's glasses is missing in several shots.

The episode would set the tome for the series and introduce several characters and their characteristics, as well as other themes and references which would later be used both in canon and in countless fanfiction works. Among them are:

There are four other new students in the first-day tour of Lawndale High. All four hang around as voiceless background characters; "Shaggy" and "Scarlett" have proven popular because of their distinctive looks.

This episode has the single reference to Daria's old show Beavis and Butt-head, when Helen refers to how Daria shouldn't want Lawndale to be "Highland all over again". (The girl says it can't be "unless there's uranium in the drinking water here too") Neither Beavis, Butthead nor any character or setting from Highland will be mentioned during the entire run of Daria.

Corey's line, "Hey, beats algebra, though, doesn't it?", is very similar to what Barry Loukaitis is alleged to have said after he shot and killed his algebra teacher ("This sure beats the hell out of algebra, doesn't it?"). This is an eerie coincidence rather than deliberate: the line is in the script dated January 26th 1996, while Loukaitis' murders happened on 2nd February.

"Esteemsters" has a curious place in the hearts and minds of Daria fanfic writers. See "Esteemsters" and Daria Fanfic for an extensive discussion of this topic.

Also, while Daria was almost certainly joking when she said Highland had uranium in the drinking water, fanfic after fanfic has worked off the premise that she was telling the truth.

Retrieved from "https://dariawiki.org/w/index.php?title=Esteemsters&oldid=29298"
Category:
Cookies help us deliver our services. By using our services, you agree to our use of cookies.