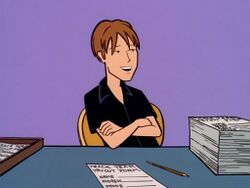 Evan appears to be initially quite charming and friendly, despite his disdain for people who had no passion for athleticism - which initially just comes off as disdain for the Fashion Club. He's a popular kid and his good looks and charm catch the eye of Jane. She is obviously smitten with him when she is part of the Track Team. Despite Daria's antipathy, he is personable and nice to her face.

However, when Daria isn't in earshot and he knows Jane is annoyed with her, he shows his true colours: saying he doesn't understand why Jane hangs out with Daria, as it's "not so cool" for a sports star like her to be hanging around "losers". This turns Jane off and convinces her to leave the track team. Ethan is later part of Ms. Morris' group who try to intimidate Jane into rejoining the team, and shows no concern that Jane is being blackmailed. When she refuses to play ball, he says "I don't get you".

He is seen on occasion in fan fiction, mainly in alternate universe versions of "See Jane Run" (see John Lane et al). He is usually in a negative light as an antagonist for Jane and Daria.

Several stories present him more favourably and even have him getting back with Jane, such as Turnabout Confusion or Ring Toss.

In The Best days of our lives revised he becomes Trent's helping hand in getting through high school again. In that story he and Jane react like an old couple around each other.

In The Spectacular Spider-Girl he is a friend of "Flash" (a nastier, AU version of Kevin Thompson) who torments Jane, at least in part because she had previously joined and quit the track team in this continuity as well.

He plays a big role in Wouter' erotica story Keeping Track of Fantasies where Jane fantasizes about what could have happened if they'd had a one night stand; in that story, an older Evan succeeded Ms. Morris as PE teacher and the track team coach.

Retrieved from "https://dariawiki.org/w/index.php?title=Evan&oldid=27095"
Category:
Cookies help us deliver our services. By using our services, you agree to our use of cookies.