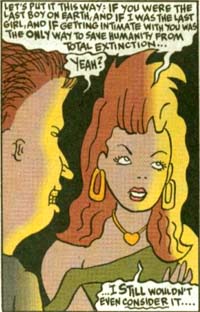 Gina was a popular girl in Daria's ninth-grade classes at Highland High. While her clothes may change, she was recognisable by her distinctive quiff and her oblong earrings. She's friends with the equally popular Kimberly. She's also dating Todd Ianuzzi, a notoriously violent older criminal.

As a sentient human, Beavis and Butt-head nauseate her: she refuses to work with them in class and was enraged when their idiocy ruined her hair along with the rest of the classroom ("Fudge Factory") and when once hit on ("April Fools!"), she gave the above putdown.

In "Spin the Bottle", she was part of a game of spin the bottle at a party. The two buttmunches crashed it and she remained only because football player Tommy promised it wouldn't put at either Beavis or Butt-head. She faced the horrific possibility that the bottle was going to point at both of them but she was saved when Tommy cheated, causing her to become enamoured with him. Don't tell Todd!

She goes unnamed in comics and episodes with Daria in, but a name she has nonetheless.

In some episodes, she's dating Todd but it's only in "Virtual Stupidity" that she gets explicitly named as his "girl". There, she helps him in his criminal activities.

Retrieved from "https://dariawiki.org/w/index.php?title=Gina&oldid=26313"
Category:
Cookies help us deliver our services. By using our services, you agree to our use of cookies.