Daria creator Glenn Eichler as a cartoon character, seen in "Fair Enough" and "I Loathe a Parade"

Glenn Eichler served as the managing editor of the American humor magazine National Lampoon. It is not known how long he served in this capacity, but he was editor as least as early as 1983. A notice in the weddings section of The New York Times mentions his upcoming marriage to Michele Tomasik on September 24, 1983. (Ms. Tomasik was the editor of The Daria Diaries.)

In addition to his work with National Lampoon, Eichler was a freelance writer for Esquire, The Village Voice, and The New York Times. Non-B&B television work from Eichler before Daria included story editor positions at UPN cartoon The Mouse and the Monster and MTV Animation production The Maxx. He also served as the writer for the 1992 Mystery Science Theater 3000 documentary This is MST3K. 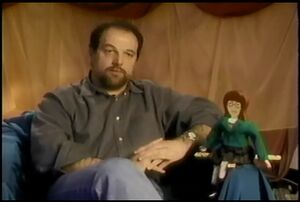 Glenn Eichler in Daria: Behind the Scenes

Glenn Eichler mentions how he got started with MTV in an interview.

Well, I guess Beavis was my big break. I was an editor at National Lampoon, during MTV's youth, and came over to MTV as a promo writer, and Beavis happened to come out of the promos department, because a very creative producer there, named John Payson, found Beavis, at I believe the Spike and Mike's Twisted Film Festival. To make a long story short, the little short that Mike Judge produced got a big reaction immediately from MTV viewers, and they wanted to rush into production and start making cartoons, but they didn't have a staff, so they used the promo writers as the writers, and that's how I became a cartoon writer, I guess.

Other writers with whom Glenn Eichler worked on Daria, such as Peter Gaffney, were known through Eicher's days as a National Lampoon editor.

He would also write one episode of Married With Children before beginning work on Daria.

After Daria finished, Eichler stated that he was "just keeping busy". He worked on MTV pilots based on "Mystik Spiral" (which have never been aired) and Hey Joel (which was briefly a cartoon series). He also worked as a Creative Consultant on the animated television programs W.I.T.C.H. and O'Grady. He wrote episodes for programs such as Big & Small and The Emperor's New School.

Eichler then served as a writer/producer on The Colbert Report, a show mocking right-wing American news with Stephen Colbert taking on a fictional persona as a conservative blowhard. It is on the Comedy Central network in the United States. The show's writing team, including Eichler, wrote the book I Am America (And So Can You!), credited to Colbert's character. Eichler has won two Emmy Awards as part of The Colbert Report's writing team.

In 2009, Eichler completed writing a graphic novel with Nick Bertozzi called Stuffed. Eichler followed up in 2011 with Mush! Sled Dogs with Issues, with Joe Infurnari.

Eichler is currently a writer on The Late Show with Stephen Colbert.

Kara Wild did a series of interviews with Eichler over the course of 2005 and 2006, covering continuity details, creative intent, shipping, and production. The interview is collected at Kara's DVDaria website (Wayback).

Appearances as a Daria Character[edit]

Retrieved from "https://dariawiki.org/w/index.php?title=Glenn_Eichler&oldid=28709"
Categories:
Cookies help us deliver our services. By using our services, you agree to our use of cookies.