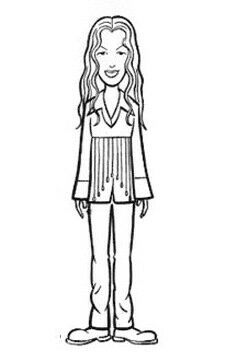 Heather was a Middleton College student who acted as a tour guide for the Morgendorffers in "College Bored".

Heather is a college student with long brown hair. She initially displays a perky, upbeat personality, until everyone but Daria has gone - then she starts to show a more cynical, apathetic personality. She is quite blase about abandoning Quinn to run around the frats. We know she smokes, that she gets briefly mortified by parents trying to seem "cool", and that she finds the fraternity row "creepy" but is still eager to attend frat parties.

She ended up bonding for a bit with Daria, introducing her to the 'real' college: sitting around being lazy, having to work on a "stupid" job to pay for it and begging family for money. Daria seemed to get on with her.

Heather is either not that smart or is just very, very lazy: instead of doing her own essays, she pays other people to do it for her and can't tell when they've done it badly. Daria took advantage of the situation to write essays for her and other students.

Heather is rarely seen in Daria fanfiction. Alternate universe versions of her appear in:

Retrieved from "https://dariawiki.org/w/index.php?title=Heather&oldid=16289"
Category:
Cookies help us deliver our services. By using our services, you agree to our use of cookies.