Highland High's football team and cheerleaders made appearances in several Beavis and Butt-head episodes and comics, though never to the extent that the Lawndale Lions did in Daria. Coach Buzzcut was in charge of them and they played a rival team known only as "Tech". The team uniform was red shirts & helmets with yellow shorts.

As with characters like Cassandra, these characters are 'grandfathered' into Daria canon due to her ninth grade year at Highland High - and have appeared in stories where Daria has a (minor) speaking role. As these were popular people, Daria Morgendorffer would have hated the buggers. 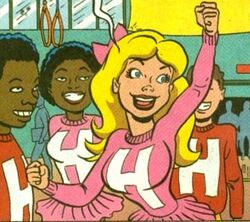 Sandy is the head of Highland High's pep squad, in "Go Highland"; blonde, blue-eyed, southern belle accented, and intensely, unstoppably perky. She remained optimistic and encouraging when Beavis and Butt-head were placed on the squad. When she fell off the human pyramid at a pep rally, Beavis caught her... and tried to run off with her.

Later, at the big game, she witnessed Beavis come close to winning the big game and then blowing it by being stupid. Sandy was the first Highland student to hit him for this.

'Ram and Buck were two of the star football players in Daria's year at Highland; Ram is the blond one, Buck the brown one. Huge, hulking figures, they made an enemy of Buzzcut when they decided to retire from the team because it was affecting their studies. ("What's more important - quantum physics or football?") They were cut from the team and made into public pariahs by the coach, who alluded to them at a pep rally as "bad apples" who "think studying is more important than winning!".

Ram assured Buck that at least they'd have time to work on their poetry magazine, Inscape.

When they were outcasts for choosing studies over sports, did fellow brain Daria have any interaction with them...? 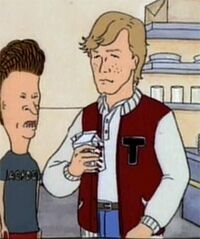 He probably won't be snogging Daria.

Tommy is a football jock, named in the non-Daria episode Spanish Fly; he seemed obnoxious and aggressive but that was probably because Beavis and Butt-head existed. He makes an appearance in "Spin the Bottle", playing spin the bottle at a party Daria, Beavis, and Butt-head have been invited to. Tommy had to convince Gina to keep playing when the buttmunches joined in and heroically rigged the game so she'd kiss him instead of them (and then hurt them).

Retrieved from "https://dariawiki.org/w/index.php?title=Highland_High_football_characters&oldid=26309"
Category:
Cookies help us deliver our services. By using our services, you agree to our use of cookies.