And if there's no canon evidence, you can use out of context screenshots like this one from "Daria!"!

Generally, any two same-sex characters on television seen as having a fondness for each other's company are sometimes seen as gay (Kirk and Spock, Cagney and Lacey, Xena and Gabrielle, Starsky and Hutch, etc), which leads inevitably to slash fanfics.

But what evidence or hints in the canon can be used? And what do the other characters think of it?

We should also date that one thing that dates Daria is that there's only a single confirmed LGBT characters in it - Alison, a predatory bisexual. As time moves on, this becomes increasingly problematic.

One of the most asked questions in Daria fandom (particularly the older male part): "Are Daria and Jane lesbians?" Do the sixty-five episodes, two movies and two canon publications imply or prove outright that either Daria or Jane are gay?

Daria and Jane seem to spend time exclusively with each other for the first three seasons. We see neither of them spending any significant time with their opposite-sex counterparts at school until Tom Sloane appears. Even given that, after "The Kiss" Jane and Daria show more concern about their lost friendship than with losing/gaining Tom.

Glenn Eichler said in a June 2005 interview that Jane could be "straight and curious," and left open the door to speculation for either character.

On more specious grounds, you can argue that Jane's painting at Ashfield in Is It Fall Yet? depicts a figure trapped in a safe. This could imply that Jane is "closeted" and unable to come to terms with her true feelings about her sexuality. When Alison told Jane she never "hit on straight chicks", Jane starts to have doubts about herself after that encounter. On the other hand, Jane explicitly tells Alison beforehand that she isn't gay and flees the room, and will later snarl to herself that Alison said she "give[s] off gay vibes" just to manipulate her into bed.

Jane also dated only boys during the series: Evan, Tom Sloane, Nathan the retro guy, and she had a brief make-out in "The Invitation" and was attracted by Upchuck's cousins in "Daria Dance Party".

The show writers knew of the debate and in two sections of the Sarcastathon 3000 framing sequences, they mock them: Daria not wanting to be seen nude near Jane because of "those rumours about us" and the two being drawn as a bride and groom. Daria and Jane both deny being lesbians as show hosts in the earlier MTV's Daria Day Marathon, an "off-canon canon" scene:

Daria: Okay, we're back with an online question from Brian H.

Jane: "Dear Daria, are you a lesbian? If so, would you be interested in acting in a film?" Wow.

Daria: Brian, I'm not a lesbian. But if you think you have to be a lesbian to play a lesbian, then you must think Tom Cruise drinks the blood of virgins.

Daria: Huh? Oh yeah, but you know what I mean.

Daria: You are not.

When it comes to their views on LGBT sexuality, Jane gave no sign of being bothered Alison was bisexual, solely that she was being pushy. 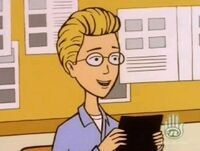 Ted DeWitt-Clinton is a reversal of Daria and Jane - in his case, there's no evidence he's straight! In "The New Kid", he famously blew off a girl, one that he seemed unclear if he was interested in at all, to pal around with the guys. Later, on the Daria website, Ted refered to "the haunting allure of Charlie Rose. Those sad eyes of his have seen so much. What's happening to me?"

As a result, fandom has frequently written him as gay. Surprisingly, his comment on Rose wasn't known about by most of fandom when this started!

Other characters and their views[edit]

Secretly a lover's tiff?
(No)

We know that Kevin Thompson and Jeffy have some homophobia. Jeffy's English essay in "Lucky Strike" argues that Mercutio has "a thing" for Romeo and then argues that he needs to be kept out of the locker room. On his MTV website, Kevin made it clear he wasn't gay when he assured us "not that I notice guy butts, no way. In the shower I just stare at the tiles. Uh, this is making me uncomfortable."

Jake Morgendorffer once thought Monique was Quinn's date and his reaction was a mild "I really 'don't know my kids" - apparently a man who is comfortable with the concept.

In a curious alter-ago picture at the end of the TV movie, Is It College Yet?, Lindy and Alison were depicted in a scene on a farm with a number of children, implying that they were a lesbian couple with a family.

Retrieved from "https://dariawiki.org/w/index.php?title=Homosexuality_in_Daria&oldid=29172"
Category:
Cookies help us deliver our services. By using our services, you agree to our use of cookies.