“Ill” (the different font is used to distinguish the word “ill” from the Roman numeral for "three") was the ninth episode of the second season of Daria (episode number 209). It first aired on MTV on July 6, 1998.

“Ill” was written by Peter Gaffney.

When Daria and Jane attend a Mystik Spiral gig at the Zon, Daria gets two unexpected surprises: she meets an incognito Brittany in the bathroom (and agrees to not tell anyone she was there cheating on Kevin), and she discovers that she's developed a mysterious rash on her neck and face. Not wanting Jane and the band (especially Trent) to see her like this, she ditches them and gets a ride home in a cab.

In the morning, Daria discovers (to her relief) that the rash has disappeared, then has to fend off an overly concerned Jake, who's become convinced that Daria is surly and withdrawn because she's taking drugs. (Helen points out Daria was never not surly and withdrawn) At school, Daria's rash returns while she's in Mr. O'Neill's class, and when an uncharacteristically helpful Quinn -- armed with Hydro-Eight, Poxicil, and Salosocilin -- is unable to do anything for her, Daria is forced to see the school nurse. "Ewwww!", says the nurse, unable to diagnose the issue. Jake takes her to the family doctor, who's equally stumped as to the cause of the rash, so he admits her to the hospital for tests and observation. 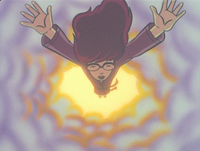 Daria dreams of being cast down

Helen is freaking out over Daria's condition, Jake is freaking out over his suspicions of drug use, Quinn is freaking out over the very cute doctor that's treating Daria, the hospital doctors are freaking out that Daria's in Mrs. Sullivan's room, where something bad happened, and Daria just wishes the whole ordeal was over. To that end, she asks Jane not to tell anyone where she is, but Jane accidentally lets it slip to Brittany, who then tells Kevin, Jodie, and Mack. After a bad night's sleep -- complete with a nightmare about Mrs. Sullivan's ghost taking her to Heaven and finding only the cool kids are allowed in -- she gets a visit from Jane, and when she figures that no one else at school even knows she's gone, she's shocked to see Brittany, Kevin, Jodie, and Mack arrive, all of whom are concerned about her and wanting to see how she's doing. (Also Mrs. Sullivan, looking for her enema bag)

Daria is finally sent home after the doctors determine that her rash was caused by anxiety, and when Helen and Jake tell her how proud they are of how well Daria handled the situation, she comes to realize that, despite their less-than-stellar parenting, they really do care about her. Jane then arrives to pick up Daria for another evening out, and when she informs her that Trent (who's standing next to her) will be giving them a ride, Daria's rash returns at lightning speed.

This is the first appearance of the Zon, Lawndale's grunge club.

The climax of this episode, occurring in Daria's hospital room, appears to be a riff on a famous scene from the Marx Brothers' film, A Night at the Opera, wherein many characters crammed into a room far too small for them.

As well as confirming some level of friendship between Daria and Jodie & Mack, this is one of several episodes that shows Brittany and Kevin treating Daria as a friend (though she appears confused by this).

A Novelization of this episode was written by Martin J. Pollard (link below).

Dr. Phillips from this episode became Hanley Phillips, an associate of DELPHI. Dr. Davidson, the other doctor from this episode, does not seem to have been used in a similar capacity at this date.

There is a fanfic also titled ill (the lower case "i" being intentional), but beside sharing a name and both stories involving Daria becoming ill they are otherwise unrelated.

Curiously, while the events of “Ill” are related in numerous fanfics, both those kept in-canon and in AUs, there does not appear to be a completely alternate version of this episode, as of this writing.

Retrieved from "https://dariawiki.org/w/index.php?title=Ill&oldid=28998"
Category:
Cookies help us deliver our services. By using our services, you agree to our use of cookies.