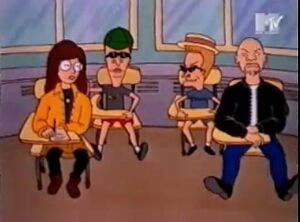 Incognito is an episode of Beavis and Butt-head which aired on September 8, 1993.

Mr. Van Driessen is lecturing the class on photosynthesis. Van Driessen indicates that the material will not be on the test and the class erupts in cheers, waving their hands wildly. (Daria included.)

The cheering wakes a snoring Beavis and Butt-head.

Awake, Beavis and Butt-head take turns throwing a fork they swiped from the cafeteria at each other. Butt-head, however, misses Beavis and knocks the lit cigarette out of the mouth of a tough student named Earl. Butt-head apologizes, but Earl growls at the two and reveals that he is packing a gun.

Back at home, Beavis and Butt-head watch a program about a criminal joining the Witness Protection Program. This gives the two the ghost of an idea.

Back at Highland High, the two disguise themselves with a straw hat, a English schoolboy's cap and sunglasses. They practice phony English accents. When Mr. van Driessen calls roll, they tell him that they are "extra-strange students" and go by the names of "Bung-head" and "Crevice". Earl is clearly not fooled.

Daria rushes to the window and something catches her attention: 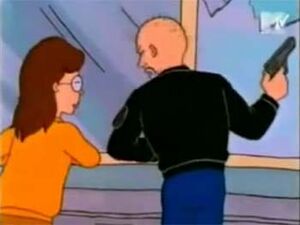 Earl takes matters into his own hands.

However, Earl pays the ultimate penalty: van Driessen tells him to turn in his gun, and he won't get it back until the end of the term. (Mr. van Driessen's desk drawer contains several confiscated guns, weapons, and other deadly paraphernalia). The gun goes off while being put in te drawer - "the safety", rebukes the teacher, causing Early to sob an apology.

The events of "Incognito" have been irregularly referred to in fanfiction - Daria participating in a retaliatory shooting may be wildly out of character from Daria's Daria but the drama and humour potential is too much for fans to pass up! Usually the event is referenced obliquely, sometimes more explicitly.

Earl became a recurring character in 2010s fanfiction as a result of this episode (and the wiki covering it), as a violent man who is nonetheless on friendly terms with Daria.

Retrieved from "https://dariawiki.org/w/index.php?title=Incognito&oldid=26374"
Category:
Cookies help us deliver our services. By using our services, you agree to our use of cookies.