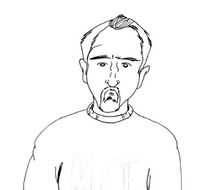 Joel Silverman is the boyfriend of Daria and Quinn's aunt, Amy Barksdale from Kara Wild's Driven Wild Universe series. He makes his first appearance in The Tie That Chokes.

Joel is somewhat like Amy's Jane -- only male, of course. He has a mischievous, sarcastic personality that meshes well with his significant other's, except when they clash, which happens all too frequently. A fierce go-getter who worked himself up from humble beginnings, Joel disapproves of Amy's nonchalant attitude toward life as much as he is drawn to it. Amy, meanwhile, is both drawn to and repelled by his exacting nature.

Joel is highly-educated, and an engineer by profession. A self-professed "computer geek," he treats himself to the latest tech toys and haunts the Internet interactive game sites. His other major hobby involves playing the jazz clarinet, but an innate sense of adventure has led him in many directions, including jet skiing (see "The Tie That Chokes").

Joel's family life is easily as screwed up as the Barksdales'. His parents divorced when he was six, leaving his father to take custody of him, while his mother took custody of his older brother and moved out of state. Now Joel gets along well with his father and step-mother, but is distant towards his mother and openly hostile towards his ne'er do well, resentful brother.

Until Joel met Amy, he was reluctant to get into a serious relationship, but after 2 years of friendship, they naturally moved into that territory. Joel eventually grew frustrated that Amy was withholding so many of her thoughts from him, and they broke up for a short time (DWU episodes #7 & #8:"None in the Family"), but when they got back together, their relationship was stronger. Joel and Amy moved in together (Episode #13: "Erin the Head") and Joel was around to deal with Helen's crisis with her marriage (Episode #19 "All But Forgotten," Episode #20 "Memory Road"). He and Amy still have their problems, but they're more willing to face them than they used to be.

Through DWU #22 "Tomorrow Never Knows" , we have never seen Joel interact with any of the Morgendorffers except for Helen. However, we know that Daria and Quinn have seen pictures and spoken to him on the phone ("Erin the Head," "Memory Road"), and that he meets them in person, off screen, toward the end of "Memory Road."

In the Driven Wild Universe Apocrypha, by contrast, Joel interacts with all three Morgendorffer women. In "Working Girl," the first unfinished follow-up to the DWU, he works with Quinn, who has an internship at his firm. The sequel to "Working Girl," "The Winter Chill," has him joining Amy on a weeklong stay at the Morgendorffers.

Most significantly in the "apocrypha," we learn that Joel has become a father to Ryan Howard Barksdale Silverman and a husband to Amy.

"I'm impatient, moody, a neat freak, I drive into hurricanes instead of asking for directions. I don't share my feelings when asked, but I make others share theirs when they don't want to. If that's not asshole behavior, I don't know what is." -- Memory Road

Retrieved from "https://dariawiki.org/w/index.php?title=Joel_Silverman&oldid=2470"
Category:
Cookies help us deliver our services. By using our services, you agree to our use of cookies.