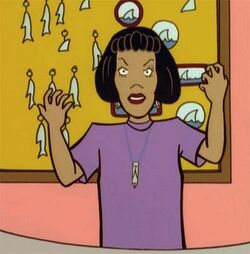 Smileyfax's "Unbearable" reveals that Jaws really happened, but Hollywood replaced Jordana with a fictional character. She engages a rampaging bear in ferocious combat.

Charles RB's "That 70s Fanfic" had a young Jordana living with Patty Wells and will not stop talking about Jaws.

Retrieved from "https://dariawiki.org/w/index.php?title=Jordana&oldid=28251"
Category:
Cookies help us deliver our services. By using our services, you agree to our use of cookies.