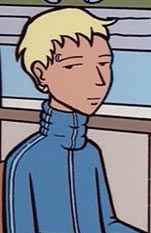 Josh is a Lawndale High student in Daria's year, in the same English/Language Arts classes as her. His name comes from Mr. O'Neill's seating chart in "Cafe Disaffecto". He always wears the same blue zip-up tracksuit jacket, darker blue baggy cargo pants, and white trainers - "Antisocial Climbers" shows he has a winter ensemble with the same colours and bagginess! - and usually has a very cool/bored expression. In "Fair Enough", he can be seen carrying a skateboard.

Josh has avoided the camera's spotlight and shows little of himself, but "The Daria Database" showed him with a grim expression as he attempted a Philosophy exam.

In "The Misery Chick", he's present at Tommy Sherman's most fateful game, alongside classmates Kelly and "Shaggy", but the same age as in the present day - clearly a sign of mistakenly used models time travel.

In the post-film chat for "Is It Fall Yet?, someone asked "Who is that one guy with the eyebrow ring and and the skateboard in the background??" Daria responded: "That's "Skateboard Guy." Aren't you paying attention?"

Josh usually appears as a background character without much to say, but he was given a major expansion in the "Ethan Yeager in Lawndale" series by Shiva. As Josh Decker, he's Ethan Yeager's first and current boyfriend and the first person to talk to him at Lawndale High. He suffered abuse at the hands of his father as a child but has only talked about it with a handful of people. Under Ethan's wing, Josh has become more friendly. His mother is Deena Decker, a divorced single mother and a workaholic' she works as a time management consultant, but she can't quite seem to make time for her son.

In The Excellent S's Lawndale Fighting Championship, he was given the surname Carter and is a developmental wrestler.

In 2019, he briefly appeared in a scene in YouthofOz's "You Know You've Done Something Wrong", under the name of "Skateboard Guy" as a meta nod.

Retrieved from "https://dariawiki.org/w/index.php?title=Josh&oldid=28187"
Categories:
Cookies help us deliver our services. By using our services, you agree to our use of cookies.