"Just Add Water" was the twelfth episode of the third season of the Daria.

Lawndale High is holding a mandatory-attendance fundraiser harbor cruise with the theme of "Casino Night", on a run-down toilet of a ship called the Princess Fairy. Daria and Jane's attention, however, is on a far more important matter: a Sick, Sad World mega-marathon.

The Titanic scene at the bow

Quinn gets a mega-makeover for the cruise and dumps her date to attend with Marco, a talcum powder model she meets at Jozu's beauty salon. Jake and Helen also decide to attend in order for Jake to butter up the ship's owner for a consulting contract. However, when he tries to suck up to the owner at the cruise, the owner's too concerned about the ship's drunken captain to listen and instead Jake gets hit on non-stop by the owner's overly amorous wife, DeeDee; meanwhile, Helen gets into a poker game with Ms. Li and the gambling-addicted Mr. DeMartino, whose luck has definitely seen better days; Marco is a no-sho and Sandi makes Quinn's life hell over it by spreading the news all over the ship; Kevin and Brittany adjourn to the lifeboat to make out, which falls into the water and drifts away from the ship; and Daria and Jane just want to catch up on the sleep they missed during the marathon. Eventually, Jake escapes DeeDee's clutches; DeeDee goes on to pursue Mr. O'Neill, and gets tossed overboard by Ms. Barch; Helen loses big to Ms. Li; and Daria and Jane don't get any sleep at all as they're drawn into Quinn's drama. Daria reluctantly advises her sister and, when the Fashion Club turn up, lies that Marco called to cancel to shut down Sandi.

Disaster strikes when the captain leaves to go to bed, and when Jake tries to stop him he gets distracted by a massive argument with Helen; Daria and Jane, realising sleep is lost to them, are the first people to sniff out that the now-pilotless ship is going to crash into a garbage scow. The Princess Fairy sinks in shallow water and as everyone jumps overboard, the tables get turned on Sandi when her date Brent (who is attracted to Quinn) publicly dumps her.

As Helen and Jake argue on the ride home, they unwittingly pass Marco -- who did turn up but at the wrong time and place -- who is being accosted by DeeDee. Back on the water, Kevin and Brittany float alone, forgotten, and unmourned...

In the original broadcast:

Mike Quinn wrote a disparaging essay after it aired, "Fair Enough is Enough", accusing this of being a repeat of the eponymous S2 ep.

In an art iron chef at the PPMB Wouter Jaegers depicted the backseat scene from this episode using the original 1995 concept drawings of Daria, Jane and Quinn. 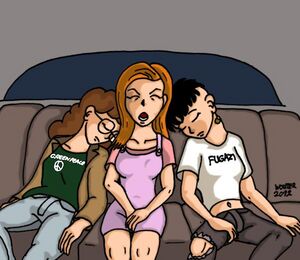 Retrieved from "https://dariawiki.org/w/index.php?title=Just_Add_Water&oldid=28983"
Category:
Cookies help us deliver our services. By using our services, you agree to our use of cookies.