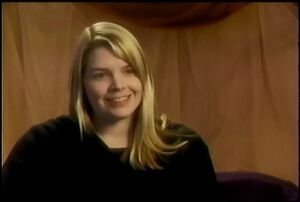 Karen in Daria: Behind the Scenes

Karen Disher was the original character designer for Daria; according to Guy Moore, she won an in-house competition to design the main characters.

She was an episode director during the first season, then was Supervising Director for the rest of the show's run. She storyboarded and directed the episode Daria! and directed the two made-for-tv movies, "Is It Fall Yet?" and "Is It College Yet?".

She also did some minor voice acting for the series, [| IMDB] credits her with the role of Sally in the episode Speedtrapped.

Years later, for the 20th anniversary, she partnered with Susie Lewis and created how the characters look in 2017 for "Catching Up With The Daria Gang".

She also worked on projects such as Ice Age: The Meltdown, Horton Hears a Who!, and Ice Age: Dawn of the Dinosaurs, where she provided the voice of Scratte.

Burnout Girl, one of the more popular background characters in the show, was modeled after Karen's appearance.

Retrieved from "https://dariawiki.org/w/index.php?title=Karen_Disher&oldid=28700"
Categories:
Cookies help us deliver our services. By using our services, you agree to our use of cookies.