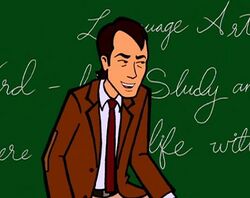 Ken Edwards is an high school English teacher, self-proclaimed author, and utter creep. He is introduced and makes his only appearance in the Season Five episode Lucky Strike.

Ken is a substitute teacher assigned to replace Timothy O'Neill for the duration of the teachers' strike at Lawndale High. He takes an immediate interest in Tiffany Blum-Deckler, flirting with her and, according to Quinn, stroking her hair while talking about his "anguished soul", under the apparent pretext that he's acting out a book he's writing. He tells the class "the only books worth reading are those written in the deep, passionate waters of life", giving the example (when he fixates on Tiffany) of the book he's writing "about a slightly older, sensitive man and the love a budding woman child feels for him when she gets to know him better". Ken tells the confused Tiffany "love can be so simple when the hand of experience nurtures the budding flower to full blossom."

He is dismissed from his duties after Helen Morgendorffer realises what Quinn's talking about and reports his behaviour. He is last seen walking away from the school, carrying a box of his belongings and crying, "Oh, Tiffany...Tiffany...I never got to hear you call me 'Ken.'" (For her part, Tiffany only worries that his dismissal might be because "his anguish [is] acting up" again.)

Angela Li's response to all this is to be irritated that she has to find a new substitute, referring to Helen as putting her in "a fix". Quinn later refers to him as "that creepy guy who wanted to fertilize Tiffany."

Daria calls him a paedophile, which is not technically accurate but the important thing is holy crap what a hideous creep.

Ken Edwards had often been portrayed as an evil character for obvious reasons. An exception is presented in Dennis' "Calling Calliope", which allowed him to be painted in a more sympathetic light, showing his motives to be a bit more innocent than what is commonly assumed.

The Angst Guy's short story "Just Desserts" features him receiving a rather nasty punishment from Mr. O'Neill, of all people.

In Charles RB's "God Save The Esteem" Mr. O'Neill is promoted to principal and Ken Edwards is hired as full-time Language Arts teacher. Unfortunately, the superintendent won't let O'Neill fire him when warning signs begin. Quite fortunately, Daria exposes him and he gets dropkicked.

In Doggieboy's The House of Cards Ken Edwards has moved on after his dismissal from substitute teaching to practicing massage, counseling and reflexology at Quiet Ivy. He is still shown to have an unhealthy interest in Tiffany, as well as any other woman who has the misfortune to seek treatment from him. Unfortunately, in this story, that includes Scarlett Hawkins.

Retrieved from "https://dariawiki.org/w/index.php?title=Ken_Edwards&oldid=27170"
Categories:
Cookies help us deliver our services. By using our services, you agree to our use of cookies.