Kimberly is the name of two seperate students in Beavis and Butt-head: 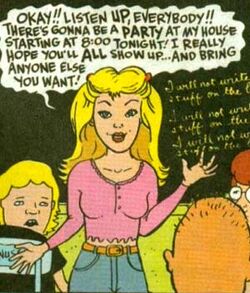 Kimberly was a classmate of Daria Morgendorffer's at Highland High. She was popular and had very little interaction with Daria - but, to her horror, several interactions with Beavis and Butt-head. Her hair alternates between blonde and brunette.

In "Water Safety", Kimberly is press-ganged into doing CPR on the buttmunches but gets out of it by revealing she has a doctor's note exempting her from "emotionally destructive" activities.

In "Spin the Bottle", Kimberly invites her whole class to her party, including Daria; she tries to make sure Beavis and Butt-head don't know about it, but Mr. Van Driessen forces her to include them. On the day, she tried to claim the party hadn't started yet (even though loud noises could be heard from the house) and this almost worked until Daria informed the two they'd been tricked. Why Daria wanted to inflict the dillweeds on Kimberly and everyone else is unknown. Kim was eventually forced to boot Beavis and Butt-head into the far corners of the party, far from human contact.

Screen capture from a group shot

Another student is also called Kimberly: a blonde punk who was a frequent backgrounder. She was in some of Daria's classes.

This intriguing character had no name in the actual series but was apparently misidentified as the original Kimberly by the staff that created the MTV computer game Beavis and Butt-head Do U, in which the duo goes to college. An image from the computer game, released in March 1999, shows the second Kimberly loaning paper to Beavis in an effort to get him to leave her alone.

List of minor characters in Beavis and Butt-head (Wikipedia)

Retrieved from "https://dariawiki.org/w/index.php?title=Kimberly&oldid=28578"
Category:
Cookies help us deliver our services. By using our services, you agree to our use of cookies.