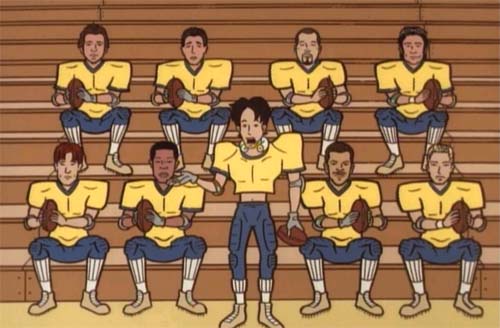 Kevin Thompson and other Lawndale Lions. Note Robert sitting on the upper left. (from "Daria!")

The Lawndale Lions is the Lawndale High football team. The team appears in some of the episodes and is referenced in both The Daria Diaries and The Daria Database. Their overall skill at football is unknown - often when they're shown playing, something unfortunate but hilarious is happening to wreck their performance - but they have previously won the state championship.

The Lawndale Lions uniforms are the school colors of yellow and blue, but interestingly they are devoid of anything identifying attributes such as player numbers and names.

A lot of grade fixing goes on to make sure they will be able to keep playing football ("See Jane Run", "Murder, She Snored"). Mack is the single member who isn't on academic probation, and seems frustrated with his team-mates at times. He's had to inform the team to stop misbehaving on the team bus, with misbehaviour including picking fights with passing tractor-trailer drivers, hiding cheerleaders in the little bathroom, and pouring drinks on the bus driver while the bus is in motion. ("The Daria Diaries")

When Kevin was absent in "A Tree Grows in Lawndale", the Lions suffered a hideous losing streak.

The Lions seem to have a merchandise line of baby versions of their shirts ("Gifted"), and they're sponsored by the Young Executives of Lawndale ("The Daria Database"). 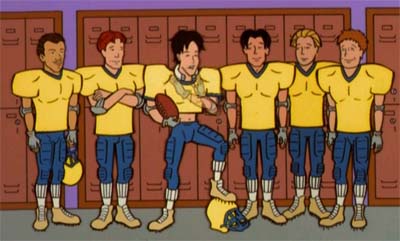 The team is trained by Coach Gibson (The Daria Diaries), who helps rig it so pesky 'grades' won't interfere with playing football.

The complete list of players is difficult to compose. Several players appear in the episodes, but only in passing and without any speaking lines. Also, few have been given names during the running of the series. The named athletes are:

Oft-recurring backgrounder Lions, seen in group shots for "Daria Dance Party", "Daria!" (as a singing chorus), and (in normal clothes) in "Murder, She Snored" include:

Latino Lion, Red Lion, Lion Who Likes Caps, and Van Dyke Lion were the chorus (with Robert) who defiantly sung they wouldn't fall for the government's lies that a hurricane was the real reason the game was canclled.

Robert, Latino Lion, and Lion Who Likes Caps buddied up again, this time with Bangs Lion, to cheat on a history test in "Murder" and cheer at their marks. None were bothered by the prospect of an F.

Upchuck is not a football player, but he is the game commentator/announcer during home games.

Mack ran the LL website, a sub-page of Lawndale High's own site (one of the MTV tie-in sites). Mack, feeling bitter at the time, wrote:

"Sports are a great way to build character. You learn how to take orders from an ignorant, often abusive authority figure, abandon any semblance of thinking for yourself, and sublimate your own values and ethics in order to bring some kind of cheap glory to a community of frustrated, embittered fatcats too old and well fed to go out on the field themselves.

We've been studying the Vietnam War in history class, and the parallels between serving in that conflict and playing high school football are really quite fascinating -- the difference, of course, being that the grunts of Nam were shunned when they came home, whereas we'll get college scholarships, unlimited credit at all the stores on campus and our pick of female students to mistreat. And not one of these mindless cretins to the left and right of me on the line of scrimmage will ever give a second thought to whether they deserve any of it.

So come on out for team sports! It's better than going to war! I really need some time off."

The football team, or references to football or players, are found in the episodes "The Misery Chick"; "Daria Dance Party"; "A Tree Grows in Lawndale"; "The F Word"; "Daria!"; "Fire!"; and "Fizz Ed".

An MTV tie-in website - transcribed at the Fandom Blog mentioned the other high school football teams in Lawndale's county:

We also see in "I Loathe a Parade" that they've played against a team with a penguin mascot/name.

The show has always been fuzzy about when in the year the episodes are taking place. Between that and Kevin always wearing his uniform, it gives the impression that football season is abnormally long in Lawndale. Several fanfics have decided that Lawndale's county has a spring football season because it loves football that much. ("But in Her Heart a Cold December" says Lawndale plays it almost all year round!)

Is It College Yet? is notable for being the one time when football season is explicitly stated to be over.

Retrieved from "https://dariawiki.org/w/index.php?title=Lawndale_Lions&oldid=28262"
Category:
Cookies help us deliver our services. By using our services, you agree to our use of cookies.