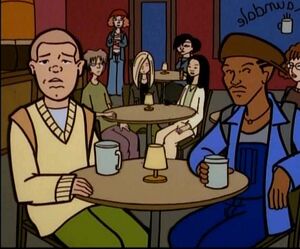 Les is a backgrounder, appearing semi-frequently throughout the show; he almost always wears a yellow V-neck jumper, and has lightly tanned skin. His name is known because he's in Timothy O'Neill's seating chart in "Cafe Disaffecto".

Les is in Daria's year and in some of her classes. In "Cafe Disaffecto", he is seen with a friend (who was a Middleton College student just last episode) and both were fans of Daria's Melody Powers story. Les punched the air when it ended.

In "See Jane Run" we learn he's a member of the Lawndale High Track Team. In this episode, he was friendly with and supportive of Jane while she was a successful team member - when she quit, he joined Ms. Morris in trying to pressure Jane into returning.

He's a fan of American football and has been seen at Lawndale Lions games. Les also has an interest in drama, signing up for The Canterbury Tales auditions in "Fair Enough".

When Mental in the Morning first turned up at Lawndale High, Les is part of the crowd that goes to see what the fuss is about; while everyone else is cheering, however, Les is standing at the back, arms folded, looking amused (by the DJs or everyone's reaction?). ("Jake of Hearts")

In "Antisocial Climbers", Les seems to listening in on Daria and Jane's snark as the blizzard comes in and someone is found missing, and does not seem happy.

In "Dye! Dye! My Darling", a boy with his hairstyle is chatting up Cindy, but it's not clear if this is him or not. It's definitely him flirting with "White Sweater" in "Fat Like Me" though: bit of a ladies' man (or trying to be), our Les.