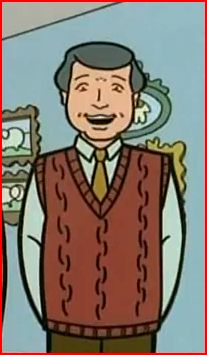 He is introduced in in the episode "Pinch Sitter," though he is first seen with Lauren as background characters on the shuttle to the Mall of the Millennium in "Malled." In Pinch Sitter, he is relentlessly upbeat and overly friendly. He's fond of referring to Tad and Tricia as "the little monsters" despite their being almost preternaturally well-behaved. Daria babysits the children when he and Lauren host Couples Therapy Night at the Morgendorffer house. Like Lauren, he is shocked by the changes Tad and Tricia make to their self-esteem record after Daria and Jane's tutelage.

Retrieved from "https://dariawiki.org/w/index.php?title=Lester_Gupty&oldid=23288"
Category:
Cookies help us deliver our services. By using our services, you agree to our use of cookies.