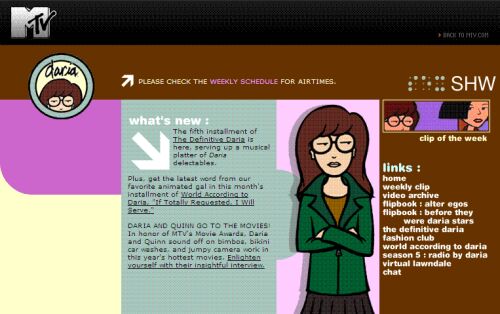 A much reduced view of the front page of the MTV Daria website, from June 2007

MTV, short for Music Television, is the network that hosted and produced Daria from 1997-2002. (This article principally refers to MTV/U.S. Daria was also broadcast on many international MTV channels during its original run.) MTV also hosts, through MTV.com, the official Daria website, though it is no longer updated and is missing some links. The site was probably last updated in 2002, as it includes an essay "by" Daria Morgendorffer referencing the aftermath of the 9/11 attacks on the United States. To promote the DVD release of Daria: The Complete Animated Series, MTV launched a new Daria website with streaming video of several season 1 episodes.

MTV was launched in 1981 as a 24-hour music video network. In the late eighties, MTV began developing and airing non-video programming, such as the news program The Week in Rock and the game show Remote Control. In the early nineties, animated programming made its first appearance on the channel in the form of Liquid Television. Arguably MTV's most popular animated program to date was Beavis and Butthead, first aired in 1993, and from which Daria was spun off.

MTV was launched by Warner-Amex Satellite Entertainment, a joint venture between Warner Bros. and American Express. In 1985, Viacom purchased Warner-Amex Satellite Entertainment and, with it, MTV. Viacom grouped the network with other cable networks to form MTV Networks, which also includes networks under the VH1, Nickelodeon, Spike TV, and Comedy Central brands, among others. Viacom also owned Paramount Pictures, whose Paramount Home Entertainment division is responsible for physical home video releases of Daria in much of the world, licensed from MTV Home Entertainment. In 2005, when Viacom was renamed CBS Corporation, MTV and Paramount were moved to the new spinoff company created by the merger, also named Viacom.

In off-canon canon material such as Sarcastathon 3000, Daria and Jane would gently (and not-so-gently) rib MTV, its shows, its work culture, and the small amount of money it spent on animation. The "Look Back in Annoyance" retrospective even had the characters worry that, after the attacks they'd just made, they weren't going to be invited to the 2002 Video Music Awards.

Retrieved from "https://dariawiki.org/w/index.php?title=MTV&oldid=28478"
Categories:
Cookies help us deliver our services. By using our services, you agree to our use of cookies.