Does Jake know about this...? 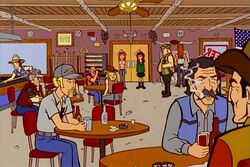 Mad Dawg's is the bar a significant drive away from Lawndale seen in the Daria episode, "Speedtrapped". It can best be described as a rural country/western bar. Daria and Quinn stop there to drop off Travis, a singing cowboy who theoretically was auditioning to sing there. After Daria realizes that Travis ended up with their bail money, they come back to find him, though asking if the bartender has seen a cowboy or an auditioning country singer didn't work ("We had a few people like that").

They eventually end up convincing the locals to donate money to their cause by dazzling them with a mix of Quinn's charm and Daria's ability to remember Conway Twitty lyrics.

Retrieved from "https://dariawiki.org/w/index.php?title=Mad_Dawg%27s&oldid=26906"
Category:
Cookies help us deliver our services. By using our services, you agree to our use of cookies.