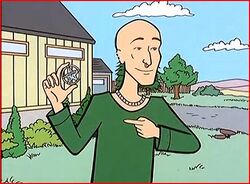 Max Tyler is the bald drummer of Mystik Spiral, and owner of the Tank, the "indestructible" van in which the band travels.

Not much is known of his past other than what Reburb tells us: he went to Lawndale High and joined the Spiral after seeing Trent's ad for a drummer in the paper. (He got the position because he owned a drum kit.) The Mystik Spiral pilot episode would have retconned this and say he'd known Trent since grade school.

It seems that most of his interaction is with fellow band member Nicholas Campbell, with whom he often gets into animated discussions/arguments.

Despite his claim to be a macho criminalé, he is not as tough as he pretends, as can be seen by his terrified reaction when arrested by the police in "Speedtrapped". He later becomes overjoyed because the officers give him a child's "Junior Deputy" toy badge.

In "The Daria Diaries", he's the only one of the group to get a favourable nod from Muck & Rage: "the drummer sure can sweat, though".

If Groped by an Angel is any sort of barometer, it follows that he isn't usually needed for providing good lyrics.

The "One Band, Napping" flipbook had him grouse him and Nick get no groupies or fanmail because Trent and Jesse get all the attention (and was not happy Nick did get a groupie).

In the Spiral episode, we would have met Max's 30ish older brother Mark: a smooth-talking wheeler-dealer.

Max appears in the Alternate Universe fanfiction Blessings of the Moon along with the rest of Mystik Spiral where he and the rest of the band try to capture and contain the possessed Stacy Rowe. He ends up cowering when fellow band mate Jesse Moreno succumbs to the power of the moon and becomes a werewolf. Max is a vampire.

Max is a Geoff Tate figure in Charles RB's "Ow! My Ears - The Mystic Spiral Story": a toxic individual who eventually leaves the band and forms his own, also named Mystik Spiral.

Retrieved from "https://dariawiki.org/w/index.php?title=Max_Tyler&oldid=27646"
Categories:
Cookies help us deliver our services. By using our services, you agree to our use of cookies.