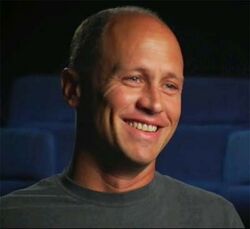 Mike Judge in 2006, as seen in the Taint of Greatness feature.

Mike Judge is the creator of Beavis and Butt-head and one of the people behind Daria Morgendorffer with David Felton and producer John Garrett Andrews. Other notable works include Office Space, King of the Hill, Idiocracy, and Silicon Valley (we won't mention The Goode Family).

He got started in 1991 when his original "Office Space" short was picked up by Comedy Central following a Dallas animation festival. Then, in 1992 he developed "Frog Baseball", a short featuring the characters Beavis and Butt-head, which featured on Liquid Television and led to his big hit.

According to Judge in the 2006 Mike Judge Collection DVD's Taint of Greatness feature, MTV sent him a development note early in Beavis and Butt-head "[that] it'd be a good idea to have a female character who didn't necessarily like [Beavis and Butt-head] but kinda tolerated them". He agreed and during the same documentary, he said "maybe Daria" was the only character in the show that wasn't flawed and laughed at. He has credited Felton for coming up with her look ("like Lynda Barry") and with the character, with Andrews creating the original design; Glenn Eichler said in a DVDaria interview that "Mike Judge named Daria after the girl he called "Diarrhea" in school"; and Andrews has told Huffington Post that he ended up sketching the original Daria design as "Judge was not at that time, by his own account, comfortable drawing female characters" at the time. "It was Mike who suggested referencing Darlene from Roseanne. Pretty but plain was the goal."

Judge was not involved in the Daria spinoff show. In a 2004 interview with The AV Club, Judge said (with noticeable frustration) that he cut out of the Daria spinoff: "Next thing I knew, they were just doing it, and I wasn't crazy about some of the people they hired. I think they were trying to show that they could do something without me. A normal network would never do that kind of stuff, unless you were a real asshole to them. I feel like Beavis And Butt-Head helped a lot of these people's careers, then they do this series without even consulting me on it. But I heard the show is pretty good. I think Glenn Eichler was a good choice to write on it. I've honestly never seen more than two or three minutes of it."

During the revival of Beavis and Butt-head in 2011, Judge was asked by press, fans, and Quentin Tarantino if Daria would appear in the show. "I should do more Daria, I guess," he told New York Magazine in October 2011. Sadly the show was cancelled before she could appear, though she was referenced during a music video segment in "Drones" (where Beavis thinks Daria killed herself and has to be reminded "she just moved"). At the 2011 New York Comic Con that he liked the character a lot and 'maybe' should do more with her.

Retrieved from "https://dariawiki.org/w/index.php?title=Mike_Judge&oldid=26094"
Category:
Cookies help us deliver our services. By using our services, you agree to our use of cookies.