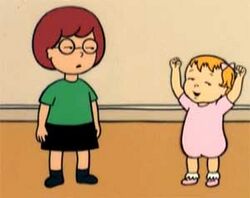 Jake forces Daria and Quinn to relive their past when he plays for them a videotape made when they were kids - specifically, baby Quinn stealing the spotlight at Daria's third birthday party - and announces that he's having all his old home movies transferred to videotape. Unfortunately, as the episode goes on, Jake winds up reliving a lot of bitter childhood memories, specifically one incident involving his falling off a bike with nobody helping him up, and keeps watching the same footage over and over, for hours...

That's not the end of Daria's cinematic experience, however, as she and Jane run into Mr. O'Neill at a local movie theater. While getting a ride home (reluctantly, thanks to a sudden rainstorm), Daria inadvertently gives Mr. O'Neill a suggestion for a class project: students will team up to create their own movies, as an exercise in "living literature". Daria and Jane team up (naturally), while Jodie, Mack, Kevin, and Brittany give it a go. Brittany wants to film a love story - with herself as the star, of course - while Jodie would rather make a documentary about a local Food Lord strike. Jodie's suggestion wins out, but Kevin winds up getting beaten up by the strikers when he tries to cross the picket line to buy Brittany a snack.

Meanwhile, Daria and Jane try several ideas - "tree cam", an art film, and an existential puppet show - before hitting upon the perfect idea when Quinn asks to borrow one of Daria's outfits for a "fashion don'ts" party: they'll make a documentary about a day in the life of a shallow, self-absorbed, yet popular teenaged girl. Quinn readily agrees, but has no idea that their ultimate plan is to humiliate her. Unfortunately, they don't get the chance - Quinn acts all nice and perfect and nauseatingly sweet - until Quinn finally loses her cool at the mall, when she suspects that Daria is zooming in on her "perfect pores".

She and Jane start editing the video, and are salivating at the prospect of Quinn's total humiliation, when Helen steps in and tries to kick-start Daria's conscience. It doesn't work... until Quinn tells them that she's looking forward to seeing her video, and hopes that it doesn't make her look stupid because sometimes she thinks that. In a rare unguarded moment, the nervous Quinn admits that sometimes she's discontented with what she and her friends talk about and knows it's stupid, but being attractive and popular is the (only) thing she knows she's good at.

Daria's conscience causes her to edit "The Depths of Shallowness" to show Quinn in the best possible light. To her and Jane's mutual annoyance, it makes Quinn more popular than ever. 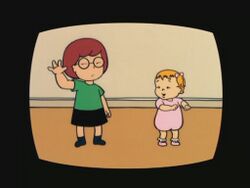 Retrieved from "https://dariawiki.org/w/index.php?title=Monster&oldid=29314"
Categories:
Cookies help us deliver our services. By using our services, you agree to our use of cookies.