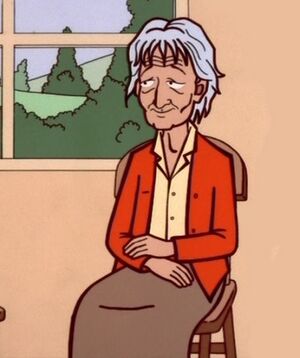 Mrs. Blaine is a resident of the Better Days Nursing Home that Daria meets during the episode, "The Old and the Beautiful". After Daria's reading is rejected by the other residents, the nurse has Daria read to Mrs. Blaine, who is deaf. Daria considers this to be a joke being played against her. However, while unable to hear anything Daria's said, Blaine asks her "read me another, dear. Please? You have such a pretty voice". At the end of the episode, Daria returns to continue reading to Mrs. Blaine after the volunteer week is over. (The material Daria reads is the second canon mention of Melody Powers.)

It seems clear that Mrs. Blaine doesn't get many visitors, and is appreciative of Daria visiting. Her odd response to Daria - who'd just had an angry rant about the trick played on her - and her smile in response to the violent Melody Powers story indicates she either can't lip-read very well, is slightly senile, or is simply that lonely.

This character was further developed in fanfiction by Nemo Blank in his story, "Vengeance" and by Richard Lobinske as Theresa Blaine in the Last Summer Series and indirectly in Falling Into College.

Retrieved from "https://dariawiki.org/w/index.php?title=Mrs._Blaine&oldid=28494"
Category:
Cookies help us deliver our services. By using our services, you agree to our use of cookies.