"Murder, She Snored" was the fourth episode of the fourth season of the Daria TV series (episode number 404). It first aired on MTV on March 17, 2000. This episode was written by Peggy Nicoll.

In History class, Anthony DeMartino returns some tests, remarking they were above his low expectations - not that most of the class seem happy with their marks, outside of Daria (100) and Brittany (66, "I passed and I got the extra point!"). However, the football team, and especially Kevin, have achieved surprising good scores. Not fooled, DeMartino confronts the QB and, after the latter is unable to answer simple questions, accuses them of cheating and threatens to fail the whole class if nobody comes forward to confess. In between classes, Mack and Brittany try to convince Kevin to admit having copied, but the latter refuses. Jane and Daria watch and comment on the situation, and Daria makes a joke regarding killing Kevin.

That evening, at Schloss Morgendorffer, Jake rants about his clients and considers changing career before interacting with Daria, though he hardly pays attention to her daughter’s answers. Alone in her room, Daria falls asleep watching TV… and starts to dream… 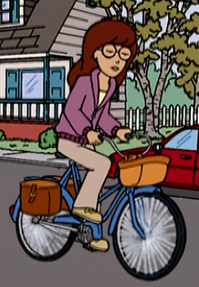 In Lawndale, Daria Morgendorffer rides her bicycle to school. Once there, she and Jane comment the cheating on the History test before finding Kevin’s dead body hidden in Daria’s double-size locker. Students and teachers gather around and wonder on the murder before Angela Li interrupts and accuses Daria. She interrogates her in her office with the help of DeMartino, O'Neill and a lying detector. The teachers play bad cop/good cop, pressuring Daria, but the student is unfazed and only provides sarcastic answers, poking fun at the teacher’s unrewarding careers and lack of prospects before walking out.

That afternoon Daria relays the news to her parents, but again both Helen and Jake pay her little attention. At Casa Lane, Daria confides her fears to Jane before the latter shows her Trent’s apparent dead body. Jake, now a private detective, arrives that moment, just as Trent wakes up. Desperate for help, Daria hires The Fashion Club - aka Charlie’s Angels. The angels immediately go check the crime scene, though they get nowhere and the three J's quickly ruin the murder scene.

The whole school attends Kevin’s funeral: the 3 J’s make a last check on the deceased; O’Neill breaks down crying on the podium; Daria and Jane question Brittany but get no useful answers; Mack is stumped when he tries to give an honest eulogy. Pressured later by Daria, he eventually reveals some anger at Kevin. Barch makes a gleeful speech about the QB’s death just before Jodie concludes the ceremony.

Sometime later Daria rides through New York back to LWH. She examines her locker and finds a pink revolver just as Ms. Li appears with police officers Jake and Helen. Daria begs for a few minutes to solve the murder and has Jane assemble the suspects. When the relevant students and teachers are gathered, Daria tricks the culprits into revealing themselves by pretending the killer would have his/her hands dirty. Found out, the various (!) murderers confess: Jane, irritated that Kevin’s cheating would cost her a good grade, had poisoned his lunch sandwich; then Mack and Brittany, angry at the QB, had hit him with a golf club and shoot him with an arrow; Barch had kicked the unconscious young man; and DeMartino had mistaken the mortally wounded Kevin lying on the corridor as resting, strangled him and hid the body in Daria’s locker.

Li interrupts the confession tales by drawing attention to the gun found in Daria’s locker… just as Quinn arrives to take it back. Enraged, the principal orders Daria to be taken away and electrocuted…

… and Daria wakes up on her bed.

Later that morning, at school, Daria retells her dream to a bewildered Jane. Later, during history class, DeMartino announces he will not fail the students, but make them take another test instead. He is interrupted by Kevin, who pretends to be dying. Enraged at the sight of the student, DeMartino starts strangling the quarterback as Daria and Jane watch and comment…

Brittany asks Kevin "what's that A doing on your paper?", but everyone has just the exact marks scored and not the lettered grades.

This episode contains multiple lighthearted parodies of detective shows and movies. Since Daria's dreaming all the references and parodies, she's presumably a fan of one or more of the shows referenced.

On the DVD, it was found that the History exam was legible. In bold are the right answers, based in Daria's exam:

Who belong the slogan "The New Frontier"?

The Bay of Pigs refers to

While tongue in cheek, this gives us some indication of DeMartino's political views. (And apparently DeMartino is ignoring that a large amount of the Marshall Plan funds were spent on importing US goods.)

The Daria Database, written two years earlier by Peggy Nicoll - the same writer as "Murder" and, from season 4, the story editor - mentions DeMartino was placed in Brookside Rest Home psychiatric hospital after assaulting Kevin. The end of this episode has Kevin being choked, the first of a few tie-ins to Database in this season (Kevin's parents in "Mart of Darkness" first appeared there).

DeMartino's lesson at the start was about "Corruption and Scandal in American History", with the chalkboard mentioning "Tweed", "Iran-Contra", and the "Teapot Dome" (which he quizzes Kevin on).

Mack looks resigned to the test and then his cheering teammates, implying visually that he knew about the cheating but didn't participate - and may be regretting it.

Kevin is on academic probation - his blather reveals that, as before, the coach is likely to fix the grades, but "Mart of Darkness" reveals this hasn't worked out, as Li is forced to have someone talk to Kevin's dad about the bad grades. (Brittany is worried about her grades being too low to stay on the cheerleading team, so nobody cares about them.)

In what's implied as a common scene, Jake is furiously ranting about his dislike of clients and his job, and Helen is on the phone ignoring him - Jake hasn't noticed.

The backgrounders Pie Cap, Blue Shirt, Happy Girl, Vneck, Orange Girl and White Sweater were all seen in Daria's dream. This could imply that, while they are not actually friends, Daria has talked to all of them in her real life, at least sometimes.

"Murder, She Snored" and Fanfic[edit]

Wouter's "What if?" series depicts Jane's confession scene with a difference, instead of posioning Kevin, Jane used Laxatives instead. 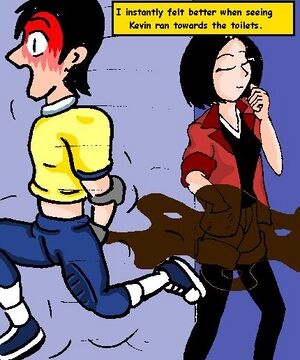 On “Murder, She Snored” the Episode[edit]

Alternate-Universe Versions of “Murder, She Snored”[edit]

Retrieved from "https://dariawiki.org/w/index.php?title=Murder,_She_Snored&oldid=29572"
Category:
Cookies help us deliver our services. By using our services, you agree to our use of cookies.