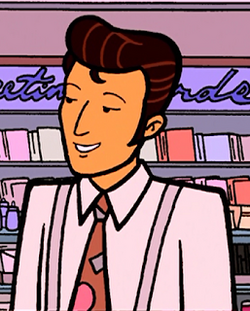 "The past was better," said Nathan

Nathan appears "Life in the Past Lane" as Jane's romantic interest and a man involved in the retro-swing movement. He owned both a zoot suit and Sammy Davis Jr's pants, and collected pre-1960s stationary, clothing, and objects.

He was charming, classically romantic (he asked Jane before kissing her), and dedicated to vintage clothes and lifestyle... compulisvely so. He showed extreme vanity over his appearance (having to restyle his hair when Jane touched it), elitism over the retro-swing movement and people who weren't 'serious' enough, and a nostalgic view for the "standards" of the 1950 in contrast to a hated modern society. He'd eventually declare that retro, in his mind, was "about pride and standards that set up apart from today's mindless, insipid mainstream!" and that you had to be "with us or against us".

Both Daria Morgendorffer and Tom Sloane disliked him, thinking he was a jerk, and Nathan was unwilling to spend time with them.

Jane was enchanted by his style and old-fashioned chivalrous front, and enjoyed getting involved in retro culture. However, Nathan ruined the relationship in one night when he became obsessive over what they were going to wear on a date, and when told he was taking it too seriously went into his "pride and standards" speech. When Jane challenged him that it shouldn't matter to him if she wore sweatpants if he cared about her, Nathan responded with a horrified "you own sweatpants?!".

In an interview Anne D. Bernstein said she was involved in swing dancing and based on the episode on that - possibly Nathan's based on some real douchebags.

Nathan is generally seen as, and written as, a dick.

A common take over time is that Nathan is bordering on being abusive (and is certainly controlling and verbally abusive), and Jane was lucky to get out when she did. LongSnakeMoan's "It Felt Like A Kiss" (use the "Rosetta Stone" to get around unicode issues) depicts what could have happened if she'd stayed with him.

A sillier take on him in Moan's "Time Travel is Serious Business", depicting a horrific truth behind Nathan's existence.

Retrieved from "https://dariawiki.org/w/index.php?title=Nathan&oldid=27523"
Category:
Cookies help us deliver our services. By using our services, you agree to our use of cookies.