A member of "the Fandom" since 1999, NomadX has done a lot of silly things with words, pencils. and PhotoShop involving "OH." A lot of it involved unjustifiable crossovers and multiple dimensions. He justifies this citing "Depth Takes a Holiday" and laughter.

In the the real world he is based out of San Diego, California with a BA in Graphic Design.

Throughout his early years in fandom, (up until the end of his high school career) NomadX kept his fingers in a lot of pies. He was a frequent beta reader, Wrote his own meager body of Work, and was a frequent contributor to PPMB, #daria+, Crazy Nutso's Rubber Board. He also drew illustrations for Shallow15's Attack of the Lawndale Zombies, the start of many future collaborations with Shallow15, Thea Zara, and Tafka the Dragon.

Recently however NomadX's participation has been mostly limited to the occasional art piece and AIM. And... bringing cute Canadians into the fold.

NomadX is known for shying away from Daria's 'house style,' often complaining of it's expressive limitations. As a result his work tends to have a bit of an abstract fell too it compared to many of the more traditional Daria Artists, such as S.C. . The following are sample of his fan art's evolution over the past 7 years. 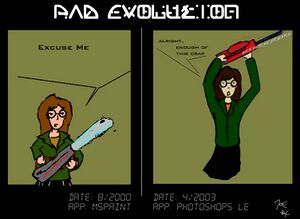 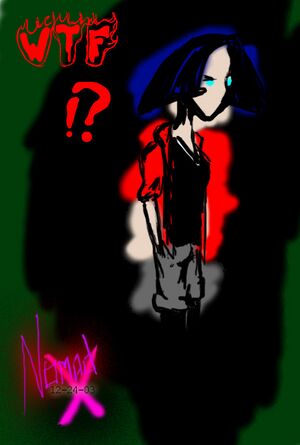 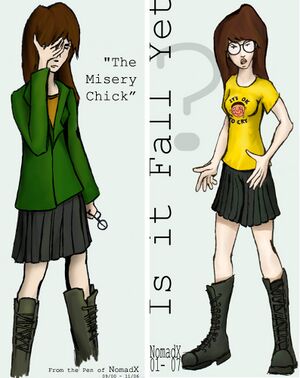 Retrieved from "https://dariawiki.org/w/index.php?title=NomadX&oldid=7035"
Categories:
Cookies help us deliver our services. By using our services, you agree to our use of cookies.