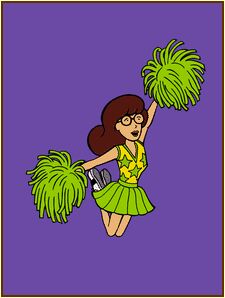 Also called "OOC," "out of character" refers to any depiction in Daria fanfic that shows one or more series characters acting in a manner inconsistent with canon—e.g., showing Daria Morgendorffer as either stupid or obsessively fashion conscious. Alternate-universe depictions of canon characters may seen OOC, though an alteration to the usual cause-and-effect chain in the series is assumed to be responsible, and should be made clear in the tale as the lynch pin for the unfolding AU plot.

Part of the problem in evaluating an OOC situation is that an author can "cherry-pick" elements from canon and use them to show a character is not OOC, but a reader can often do an equally good job cherry-picking other elements to show the reverse.

"Daria Would Never Do That!"[edit]

The "out of character" accusation is not a cut-and-dried manner. A fanwork could have an egregious instance of being out of character—for example, a fanwork showing Quinn as a fan of country music and NASCAR races. Many accusations of OOC, however, come from decisions made by a character during a story. The appropriate phrase is "Daria/Quinn/Jane/Jodie would never do that!"

Whether choices made by a character are OOC if they go against what has been established before are a matter of contention. Some prescriptivist fans believe that the patterns of action established in canon episodes prescribe the actions of the canon characters—Daria will never join a school function, Quinn will never have a steady boyfriend, etc. Other fans, however, take the opposite extreme, believing that circumstances and momentary irrationality can affect even the most consistent characters to make decisions one would not normally expect them to make.

The core problem is that the characters of Daria were not always shown to be consistent themselves. The most glaring example here is, of course, the moment when Daria kissed Tom Sloane in his car ("Dye! Dye! My Darling"), which many fans believed Daria would never have done in the first place. Other fans found reason to justify The Kiss, but it remains the prime example of when a character was considered to be OOC during the series proper.

"Out of Character" in Fanfiction[edit]

The issue can be tricky. For example, Daria is shown as mentally retarded in "It Slipped Through My Hands, Like a Shadow, Like a Dream," by The Angst Guy. This happens through an accident of genetics, which is assumed to be why she is so intelligent in canon. Reversing the situation allows the story to explore the consequences of such a change. Technically speaking, Daria in that story is OOC, but the issue is bypassed as it is the divergence point of the AU. The depiction of Helen Morgendorffer in the same story is more controversial, and some have said she is OOC for not being more supportive of Daria. For the pros and cons on this particular issue, see the story itself (link below); the author's notes at the end include a mini-essay called “A Digression on Being “Out of Character” (OOC) and the Interaction between Canon and Alternate-Universe (AU) Material,” which is relevant to this topic.

Retrieved from "https://dariawiki.org/w/index.php?title=Out_of_Character&oldid=13139"
Category:
Cookies help us deliver our services. By using our services, you agree to our use of cookies.