Party at Lindy's is fan comic by Wouter

"Party at Lindy's" takes place at Quinn's senior year at Lawndale high, the now 18-year old Quinn is invited at a party organized by her friend Lindy. That party turns out to be a big Orgy with people engaging in sexual acts as soon as Quinn enters the building. Quinn is trying to keep a low profile because of being uncomfortable with all the sexual acts and innuendo going on but just as she's about to leave she meets a Bruce, a soft spoken boy and finds out that Lindy's intention of inviting her was to introduce her to Bruce and play match maker.

After spending hour after hour with Bruce Quinn has to admit to herself that she really likes him too but when he wants to express it in a more physical way, Quinn stops him, saying that while the feeling is mutual and she does want to take it to the next level with him, it will not be at Lindy's party. She wants the two of them being just that: two, private, a young couple. Bruce then tells her about Lindy wanting to introduce him to a girl Lindy knows and grumbles in disappointment of not having found her yet. Quinn then puts the two together and admits to being the girl that Lindy wanted to introduce him to. 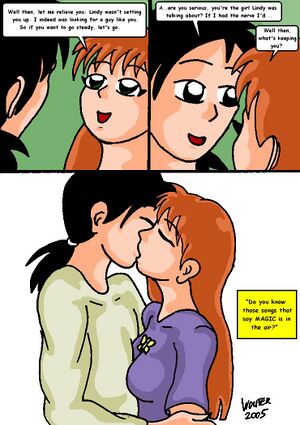 With the ice broken, the two Kiss.

In the days that follow, Quinn unintentionally becomes the subject of close scrutiny from her friends of the Fashion Club and the Three Js who've gotten a Carte Blanche on what happened by overhearing Quinn's phone conversation with Bruce where she was talking a little too loud. Needing a comrade in arms to deal with the thing Quinn calls on Daria.

Quinn is receiving a phone call from, Bruce, the guy she met at Lindy's party while sitting in Lawndale high's Cafetaria with her friends from the Fashion Club and the Three J's providing them an unintentional cart blanche on what happened...

Quinn:Bruce! Yes I recognized your voice. No way that I could forget.

At hearing that both the the Fashion Club and the three J's snap to attention.

Quinn: No Kidding, I was walking on air when I got home. The feel of that Kiss was just carrying me! Friday night? That sounds okay, where do we go? Uh-huh, I can't wait! Oh yes, I love you too.

Quinn: But please wear pants when you come over to pick me up. You have wonderful legs but let's keep it a little more decent okay?

.At hearing that The Fashion Club members begin to blush while the Three J's go white in shock. Quinn suddenly becomes aware of what's going on around her.

Quinn: (Nervously) Err... It seems that I've gotten an audience here, I'll call you back.

Daria is meeting the Three J's at the Door

Daria: Yes I know where Quinn went to and I'm willing to tell you guys but only if I'm properly motivated to do so.

Jane's dabble with cheerleading from The F Word is referenced in the story.

Bruce first appearance was in the story "Art-I-fact" where he's Quinn's future husband and the father of their three daughters.

Bruce is the only person in Dariaverse who gets the other two J's names wrong, calling Joey "Jerry" and Jeffy "Johnny"

"Party at Lindy's" is with 47 pages also the longest Comic drawn by Wouter.

Party at Lindy's on E-Hentai (NSFW)