Pause in the Air (series) 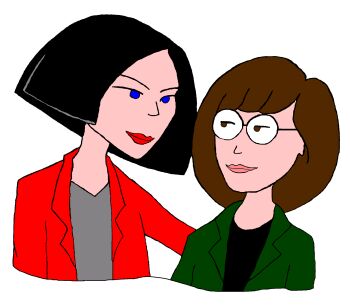 The "PitA" Jane and Daria (the latter with bob cut from "April Showers" onward), by TAG

Pause in the Air is a romance series written by The Angst Guy wherein Daria Morgendorffer and Jane Lane deal with pregnancy as an inevitable part of marriage...to each other. The series is named for the first story.

Pause in the Air (PitA) might be the first story that not only pairs Daria and Jane as a couple in a long-term relationship, but one which eschews the typical elements that belong to the genre known as slash. As opposed to a sexually explicit story, the deep love that Daria and Jane have for each other is understood and the physical aspects of Daria and Jane's private life are deliberately left unexplored. The series began as a single tale intended only to poke fun at the slash genre, then grew out of proportion after.

PitA was said by TAG in January 2010 to be completed. The ten stories in the series, in chronological order, are given below. Titles are usually constructed as short puns or word plays with double meanings.