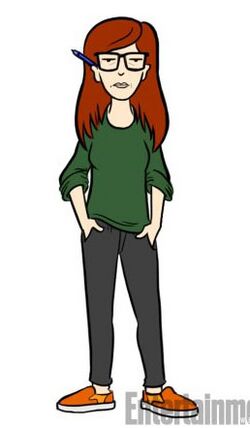 36-year-old Daria, as seen in "Catching Up With The Daria Gang"

Daria fanfiction or fan art that shows the series characters after the conclusion of the TV movie, Is It College Yet?, which was the final Daria show considered to be in canon. Most stories in this vein concern the Daria cast's time in college, marriages, childrearing, and beyond. Other stories can be considered Nextgen, dealing with either the younger children seen in the show (i.e. Tad and Tricia Gupty and Link) or the projected children of canon characters (such as Heather and Damsel Morgendorffer from The Heather/Damsel Chronicles).

Post-canon fics are sometimes used to explore different genres to the original show, including more fantastic ones, without having to fully go alternate universe: "Politricks are not for Kids" by Brian Taylor (political humour), "Drive" by The Angst Guy (hard sci-fi). Others explore either Daria's college life or the possible adult futures of the main cast ("Reunion" by Hyrin"), or to carry out shipper pairings in adulthood ("Reunited and It Feels So Good" by Person).

And others show a character's life going drastically downhill after Lawndale High for the purposes of angst! (lots of TAG fics)

Other Examples of Post-Canon Fanfic[edit]