Sealed with a Kick 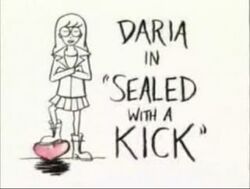 Sealed with a Kick is the pilot episode of Daria. It was written by Sam Johnson and Chris Marcil and was not intended to be aired. It was completed on August 11, 1995.

The short, black-and-white cartoon runs for approximately five minutes. Like many pilot episodes, its purpose was to give those at MTV an idea of what the series might look like.

The characters were designed by Karen Disher and Daria was voiced by Tracy Grandstaff, but many of the voices and character designs are different from those of the regular series.

The pilot opens in pitch blackness with Beavis and Butt-head chanting "Diarrhea, cha cha cha!" before Daria (it's implied) hurts them.

In "Modern Day High School", when Daria borrows a pencil from Kevin. The boy assumes that Daria is attracted to him and, after coming on to her, refuses to go out with her, stating he already has Brittany as girlfriend, though stating they could be friends (and asking for her science homework in the process).

Furious for the brush-off from a boy she wasn't even interested in, Daria swears revenge: she first pretends to be very interested in him, going to the extremes of baking him cookies, leaving him messages in the locker and flirting with him in front of his girlfriend. When Brittany drops him, Kevin loudly asks Daria out, in front of the whole class, only for Daria to immediately drop her pretended interest, refuse his invitation and state they are better as friends.

Kevin won't give up, however. That evening, after phoning Daria's house several times, he appears unexpectedly with a flowers bouquet, insisting there's a chemistry between them. Daria's attempt to clear things out is interrupted by Quinn, to whom Kevin immediately takes a liking and asks out, dumping Daria for the second time.

Later, Daria comments on the events to Jane, revealing to her surprised friend that she's letting Quinn take care of her revenge. And, indeed, Kevin soon learns the many duties and lack of quality time a boyfriend of a popular, attractive girl has to endure.

The first VHS tape for the series (called "Daria") was released by Sony Music Video on October 21, 1997. The video contained the first three episodes of Daria (Esteemsters, The Invitation and College Bored) as well as the complete Sealed with a Kick pilot.

Portions of Sealed with a Kick would be shown on the MTV special "Behind the Scenes with Daria" on February 18, 2000. However, the pilot has never been shown in its entirety on any network.

It is included on the Daria: The Complete Animated Series DVD set.

Chris Marcil told Paste: "I remember when we were talking about it we were like, ‘Oh, this is Frasier.’ You’re taking the smartest character from this goofy world and you’re trying to do a show that’s true to that character, not so much true to the world it’s from. We can’t say this is just like Beavis and Butt-head because the audience will see how phony it is and reject it."

Input was given into the pilot by Glenn Eichler - one suggestion being to turn Daria's brother into a sister. 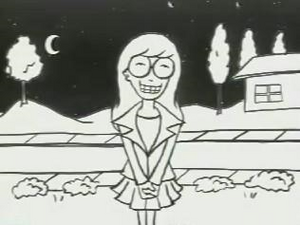 Now, you begin to FEAR!

Aside from a smile that would disturb Metalmouth, the pilot has other differences to the show as aired:

Retrieved from "https://dariawiki.org/w/index.php?title=Sealed_with_a_Kick&oldid=26789"
Category:
Cookies help us deliver our services. By using our services, you agree to our use of cookies.