From DariaWiki
(Redirected from Serials)
Jump to navigation Jump to search 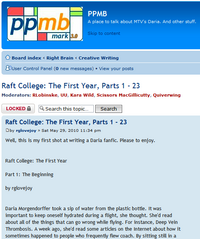 A new serial begins on PPMB.

A serial fanfic is a story told in successively published segments. The entire story is not revealed at once, and the tale usually is continued as each segment is completed by the author. Serial Daria tales usually appear on message boards such as PPMB or SFMB, each segment filling a single message block. Most serials at present are not beta-read for the authors before publication online; when it comes to catching errors in the stories, whether grammatical, spelling, or plot-related, the authors often choose to wing it in order to maintain greater output and a steadier flow of writing. The drawbacks are obvious: an author can write himself into a hole with a serious continuity mistake that a proofreader might have caught, or the writer might get bored and not finish the story (which happens a lot).

It is a common practice for each segment of a serial to end with an action-packed or emotional cliffhanger (rather like the old Flash Gordon movie serials) to hook fans into reading the next segment as well and see how the suspenseful problem is resolved. Segments of a serial can be as short as vignettes, or multipage chapters or episodes. Chapters are not self-contained and cannot stand independently of one another or the larger tale.

Serials can be extremely long and result in novel-length works with complex plots, wide-ranging settings, and frequent changes in point of view. To date, most serials have been given a definite conclusion, though some continue with no end in sight much like a TV soap opera. A very recent trend (2007) is the appearance of what could be termed volumes: collections of serial chapters that complete major plot lines within the greater story and can stand independently, though numerous plot treads are left unresolved at the ends to set the stage for the next volumes. Round-robin stories are serials with multiple authors writing segments in a predetermined order, but some serials have appeared to which anyone can contribute in a chaotic, first-come, first-printed manner.

Serial writing, also called episodic writing, has been known since Victorian times and was popularized by Charles Dickens when he began writing The Pickwick Papers in 1836. Serials were rarely seen in Daria fanfiction until spring 2004, when TAG began writing "Fortunate One" without having it beta-read. Most of his stories before then had been beta-read. He believes he saw other serials appear before "Fortunate One," but is unable to name them. The practice caught on and spread rapidly until serials have become as commonplace as short stories on message boards, and beta-reading has (alas) become rare.