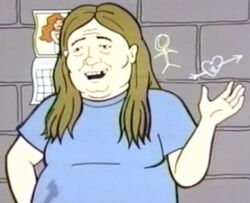 Stan is a prisoner in Fremont who shares Mystik Spiral's cell in "Speedtrapped". He tells a ludicrous amount of tall tales about his adventures in the music business, claiming to have known Jimmy Hendrix, KISS, and Sid Vicious (who told him he invented punk). Trent is the only one in the band who isn't fooled. Still, Stan does get to join Spiral in performing at a children's party.

His voice appears at the end of "Daria!", singing a cover of the song "Manly".

Retrieved from "https://dariawiki.org/w/index.php?title=Stan&oldid=26801"
Category:
Cookies help us deliver our services. By using our services, you agree to our use of cookies.