The hockey game is going well when Daria arrives to watch, until Rock N' Roll Randy hits Mr. DeMartino in the leg, leaving him lying. Andrea celebrates (apparently having that spot in the pool), only to curse as Mr. DeMartino gets back up. Eventually a brawl erupts between both teams on the court, including Ms. Barch beating up on Randy.

Daria and Quinn had no curfew until this episode - Helen is trying to retroactively claim they did, undermined by Jake admitting the truth by accident.

Barch batters Randy with a declaration of "payback time" - what's she out for revenge over??

The rules presented by Helen and Jake are displayed in ten-commandment-style cardboard tablets. In the DVD release, all of the onscreen text is legible. Some portions are repeated or don't align with the dialogue, presumably because they were only intended as filler.

2. No pimple pads in the toilet.

3. Wear your own damn sleepers when you walk out in the snow for the newspaper.

11. The ruling council shall determine when occasional questioning becomes persistent questioning and shall not be required to provide advance notice of said determination.

12. Members of this household are expected to treat each other according to the established "norms" of respect and/or rules outlined in the Geneva Conventions of War.

18. The ruling council does not allow dates on school nights.

21. Telephone usage shall occur on an "as needed" basis.

(Helen points to this tablet when she states that "rules 21 through 26" describe a sign-in procedure to follow when coming home late.)

While grounded, Daria is shown reading Herman Melville's Moby-Dick in the living room. This may be commentary on Helen's Ahab Ahab-like mania for legal procedure. 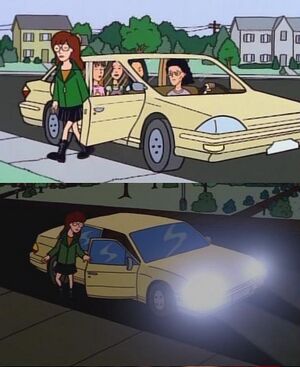 When Daria herself was asked about it in an MTV online chat, she replied "I promised the governor I would never reveal that."

“The Big House” and Fanfic[edit]

Retrieved from "https://dariawiki.org/w/index.php?title=The_Big_House&oldid=27916"
Category:
Cookies help us deliver our services. By using our services, you agree to our use of cookies.