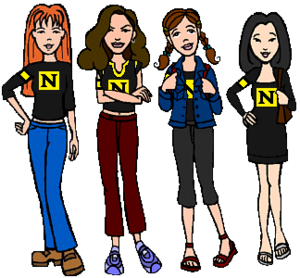 You're either Nexus or you're against us!

The Excellent S lives in Sydney, Australia. He remembers being a fan of the show as a child during its broadcast run in the late 1990s/early 2000s.

A long-time professional wrestling fan (as noted by his PPMB signature pics, depicting the cast of Daria wearing various wrestling shirts and attires), he re-discovered Daria in 2010 thanks to a discussion on the show at the wrestling forum he frequents. This inspired him to watch some of the episodes on YouTube. He has been hooked on the show ever since.

Despite having absolutely no previous experience in writing fanfiction, he did so with his first story, Rowe'd Racin'. Not expecting much of a response, he was pleasantly surprised when the story received mostly positive feedback. This inspired him to write more stories, including a second Alter-Ego Chronicles story ((Change The Story) Morning Glory) and the stand-alone It's a Sick, Sad, Sad, Sad World. Another project saw him crossover Daria with professional wrestling, with the Lawndale Fighting Championship, where various Daria characters compete and take part in wrestling matches and storylines. His good friend breitasparrow produced a series of artworks for this series.

He is a meticulous writer, bordering on obsessive compulsive, often re-submitting the same story multiple times to Outpost Daria (much to the (hypothetical) chagrin of Martin J. Pollard) with only a few spelling repairs or new dialogue. He enjoys writing ensemble pieces, and tries to include as many characters from the show into his stories as possible, especially those from the vast library of one-shot and background characters.

He was an advocate for an international (or at the very least, Region 4) release of the Daria: The Complete Animated Series DVD set, including the quote "NO REGION 4 DARIA DVD SET, NO PEACE" at the end of every piece that he has posted at Outpost Daria. Despite this, he was actually very peaceful on the matter. Following the Region 4 release of the set in June 2011, subsequent OD pieces have the original quote crossed out and have "WE WON!" written next to it.

Retrieved from "https://dariawiki.org/w/index.php?title=The_Excellent_S&oldid=27325"
Categories:
Cookies help us deliver our services. By using our services, you agree to our use of cookies.