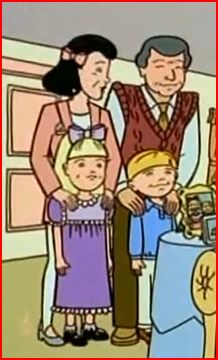 The Gupty family, in a scene from Pinch Sitter

The Gupty family is a family of four who appear in speaking roles in two episodes of Daria. The family consists of parents Lester and Lauren, older child Tricia and younger child Tad, who is explicitly said to be 6 years old.

Their first speaking roles are in the episode "Pinch Sitter," although they are seen as background characters in "Malled." They are shown as a cloyingly sweet "perfect family", and Tad and Tricia are well-behaved nearly to the point of being Stepford Children. Their house is decorated inside and out with cutesy tchotchkes like lawn gnomes and animal figurines and is painted in bright primary colors. Under Daria and Jane's influence, the Gupty kids become more cynical and self-aware by the end of the episode.

Their second speaking roles are in I Loathe a Parade, where they are among the attendees at the Lawndale High Homecoming Parade. Tad has by far the largest part; Daria discovers him separated from his family and helps him to look for them. This development, along with Tom's presence, drives the middle third of the episode. When Tad is reunited with his family, each of the three other Guptys has some dialogue. It is fairly clear from Tad's interaction with Daria that the deprogramming from Pinch Sitter has worn off.

In "Pinch Sitter", we discover that Lauren and Lester are involved in Couples Therapy Night with the Morgendorffer's. From that episode alone, it can be assumed they're running the group for the benefit of the other couples. However, the website From the Desk of Helen Morgendorffer reveals that they used to be part of Couples Therapy Night for their own benefit. Helen reports they left the group in 2001, claiming to be in love ("who are THEY kidding?"). "It Takes Two to Tangle", also written by Anne D. Bernstein (who created the couple), said "they have common passions, but additive-free foods alone do not a marriage make".

The Look-Alike Series by Canadibrit has an unusual portrayal of the Guptys, as now-bitter parents of pre-teen delinquents thanks to Daria and Jane. Kara Wild's Driven Wild Universe has the Guptys expanding their Couples Workshop empire to public access television until a massive public blowup between Erin Chambers and Brian Danielson brings their success to a screeching halt.

Both Lester and Lauren appear in a one-off Dariarotica artwork by Wouter called "Favorite babysitter" in which they turn to Daria on a point which was raised at couples therapy night.

Tad and Tricia often turn up in post-canon stories as teens or young adults. Examples include: