“The Misery Chick” was the thirteenth and last episode of the first season of Daria. It first aired on MTV on July 21, 1997.

"The Misery Chick" was written by Glenn Eichler.

Former Lawndale High football star Tommy Sherman, a student who had attended school three years previously, is returning to have a goal post named in his honor. Daria is told of the his athletics exploits, including his tendency to score touchdowns by himself, his habit of crashing into goalposts while waving at the crowd and his induced coma from which he had awaken up to win the state championship years before. This description prompts sarcastic remarks about the student and his expected future life, both to Jane and to Jodie, the latter of whom is angry she has to write an introductory speech for Sherman.

However, Tommy Sherman is shown to be a very unpleasant person, strutting through the school halls, bluntly propositioning Brittany and insulting Kevin and Mack shortly after arriving in Lawndale High.

Daria, who witnesses this behavior, is fed up and verbally belittles Tommy when the later makes some nasty remarks to her and Jane as Daria was just asking him to move (he was leaning on her locker). Tommy, however, doesn’t get mad at the verbal barb and makes one of his own, pointing out he's a winner who’s going to be honored, whereas Daria is just a depressed whiner girl, nicknaming her ‘misery chick’. After the exchanged insults, he sets out to the football field for the ceremony. As Daria expresses her disdain about a jerk like him being seen as a hero for the rest of his life, Jane casually remarks that "Maybe he won't live that long". Just after she says that, Tommy is killed when the goalpost falls on him. 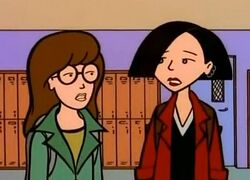 "Err, what did just happen?"

The next days are filled with reactions to his death. Mrs. Li address a student’s assembly, praising Sherman, as with an inconsolable Kevin cries all throughout the ceremony. Daria, on the other hand, Daria finds herself the object of much unwanted attention from other students and even a teacher. They feel either sad or anxious by the situation and consider Daria to be a candidate to understand death related subjects, since she is often seen as being gloomy and depressed. Despite her unease with her role and label of misery chick, Daria consoles Kevin, Brittany, O’Neill and even Quinn. At the same time, Daria finds the one person she is interested in talking to, Jane, seems to be avoiding her.

Finally fed up with her friend’s absences, she goes meet her at the Lanes. After a brief conversation with Trent, where he reveals Tommy and he had been classmates but hadn’t had much contact, Daria confronts Jane in her room. After an awkward beginning, Daria expresses her frustration: that people keep assuming she's miserable and therefore knows what to do when she isn't miserable, just not like the others. Jane explains the reason the others were coming to her was that they were searching for ways to deal with Sherman and to stop thinking about life and death, thinking Daria would be the best to approach; when they say she's miserable, they mean "you think" and they want to know how to cope with having to think things they don't want to.

Jane admits she had been avoiding Daria because she didn’t want to remember that her comment might had caused the football player’s death, a notion Daria quickly dismisses, and the two clear the air on all the sore points: that Jane doesn't think Daria's a misery chick, and that Daria knows Tommy Sherman shouldn't have died but that he also wasn't a nice person. Afterwards, Jane admits she told Trent to say to anyone that visits that she was out running. "What a surprise, he forgot." "He didn't," replies Daria.

Soon everything is back to normal in Lawndale high, though Daria gets to lay things down when asked a question about Tennyson's "better to have loved and lost" quote, as she says realising that life is both good and painful is being realistic, not miserable, and recognises pain is better than feeling nothing. Despite all this, Daria is still approached a few days later. This time by Sandi, whose cat Fluffy is ill. However, Daria is now ready, demanding a cash payment in advance of delivering blunt, though effective, advice. 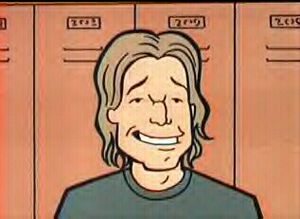 A hunky guy with an adman haircut, y'know.

Daria and Jane in "The Misery Chick". Daria's coloring is far different from her usual looks.

“The Misery Chick” and Fanfic[edit]

This events of this episode, or alternate versions thereof, have been used in multiple fanfics, including:

Retrieved from "https://dariawiki.org/w/index.php?title=The_Misery_Chick&oldid=28928"
Category:
Cookies help us deliver our services. By using our services, you agree to our use of cookies.