The Old and the Beautiful

"The Old and the Beautiful" was the second episode of the third season of the Daria TV series (episode number 302). It first aired on MTV on March 3rd, 1999.

"The Old and the Beautiful" was written by Rachelle Romberg.

In order to win an award for the school, Ms. Li asks (read: orders) everyone to volunteer during Awareness of Others Week. Jane chooses to teach arts and crafts -- in her own unique way -- to patients in a chidren's ward, the Fashion Club decides -- in their own unique way -- to collect clothes for the homeless, and Daria volunteers (reluctantly) to read to senior citizens at the Better Days Retirement Home. (So do Kevin and Brittany, mistaking "seniors" to mean they'll get to hang out with the senior students at school) 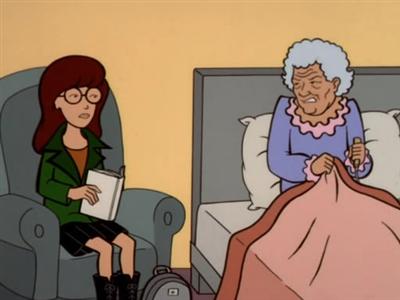 However, the seniors are completely turned off by Daria's monotone, unenthusiastic voice (as well as her "unique" choices in reading material), while lavishing praise on the efforts of perkly Brittany and Kevin. In Daria's second go at it, one old man unplugs his respirator rather than listen to her anymore.

Feeling bad, Brittany invites Daria to her house (where she's introduced to Brittany's parents, Steve and Ashley-Amber) and attempts to make Daria's voice "perkier", but soon pronounces Daria a hopeless case. Meanwhile, Jane begins to induct the kids into macabre art and the Fashion Club find none of the clothes being donated meet their high standards, while their budget for buying clothes is spent on themselves. (At one point, they discuss the need to help the homeless while actively ignoring the homeless man they're walking past)

By the end of the week, Daria is shunned by the seniors and is asked to read to Mrs. Blaine... who turns out to be totally deaf. Dejected and humiliated, Daria is ready to storm out when Mrs. Blaine asks her to read another and tells her that she has a pretty voice.

At the end of the week, Jane is banned from the children's ward when she teaches the kids to turn the wall paintings into an Old West battle scene, the Fashion Club donate a single scrunchy, Ms. Li gets the commendation from the superintendent that she wanted, and Kevin and Brittany are praised for their efforts... and Daria voluntarily returns to the nursing home to keep Mrs. Blaine company.

The title of this episode is related to the title of a soap opera, "The Bold and the Beautiful."

Brittany writes down Kevin's name on the sign-up form - as "Kevvy".

Lawndale appears to have a homeless problem.

Quinn refers to Brooke, the Fashion Club hopeful from Too Cute, and is eagerly putting the boot in.

Brittany is unaware her voice squeaks.

This features the second appearance of Daria's Melody Powers stories.

At dinner, Daria is reading The Leopard, by Giuseppe di Lampedusa.

On “The Old and the Beautiful” the Episode[edit]

Alternate-Universe Versions of “The Old and the Beautiful”[edit]

Alternate Canon Versions of “The Old and the Beautiful”[edit]

Retrieved from "https://dariawiki.org/w/index.php?title=The_Old_and_the_Beautiful&oldid=29274"
Categories:
Cookies help us deliver our services. By using our services, you agree to our use of cookies.