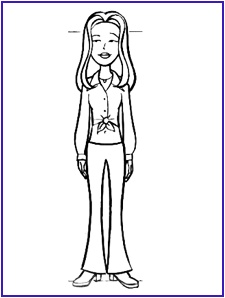 The Popular Girl (or simply Popular Girl) is a gossipy teenager who made her most noteworthy appearance on Daria in "The Invitation," with her only speaking role. She only appeared occasionally as a background extra after that, but she does appear in the opening credits as a volleyball player opposing Daria's team. As the recurring fanfic character Tori Jericho, she is everywhere and there is no escape.

She was voiced by Ashley Carin.

In "The Invitation", Popular Girl stands with Sandi and Tiffany at Brittany's party, giving a running commentary on how popular each guest is and how their rankings might change. (" He's medium popular, and he just bought a great car so soon he'll be getting more popular.") At the sight of Daria, Jane, and Upchuck, she makes the snide remark: "Those three aren't popular at all, I don't know what they're doing here. Maybe some kind of exchange program." She's on friendly terms with Sandi and Tiffany, and is impressed by Sandi's (rubbish) joke at Daria's expense.

She never speaks again after this episode. The "Oh, the Obscurity!" feature on MTV's old Daria website says, tongue in cheek, "she dropped out of sight shortly thereafter. (Sandi probably had something to do with it)".

She appears in the back of classes taken by Quinn Morgendorffer and the Fashion Club, putting her in their grade at school. She is also seen in "Too Cute", standing among the group of popular girls admiring Brooke's new nose job. She's been seen hanging with "Kia" a number of times; the two are probably friends.

In "I Loathe a Parade" she and Blue Shirt seem to have something going on: the two are standing together, and Blue Shirt leans over to put his arm around her as Daria passes. (They are later pelted with candy by the football team, who misunderstood what 'passing out candy' means) Given her popularity, she probably dates a lot. 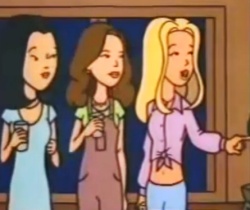 Vast hordes of Popular Girl One appearances (many can be seen in the links below) started in spring 1999, when Austin Covello named her Tori Jericho in "Boy Fiend." Austin continued to use this name in other stories (e.g., "Otherwise Known as Quinn the Great"), and the practice has since been widely adopted by other fanfic writers. (Austin even parodied his creation of the name in an AU tale, "Stacy Rowe, Evangelion Pilot.")

Tori's personality has remained stable through most fanfics featuring her: a mildly irksome, shallow, rumor-mongering popularity princess who likes attention and dislikes Daria. She has running appearances in Canadibrit's The Look-Alike Series stories as Lawndale High's "one-stop gossip shop and popularity gauge on legs"; as a conspirator involved in the social disruption in Dennis' Turnabout Confusion; and wannabe manipulator in Charles RB's "God Save The Esteem", where she runs Lawndale Hot/Not.

In Brother Grimace's "It's All About Respect," Tori is shown as on-air reporter/anchor for Lion Tales, the LHS in-school news program. This role, too, has been adopted by other writers (e.g., "Four Play," by Crusading Saint).

Her relationship with the Fashion Club in general and Sandi in particular changes from story to story, but sometimes she ends up in the Fashion Club if another member is out of favour. In cfardell_Brenorenz29's "Quinn's Code" series, she replaces Quinn and is very unnerved by how obsessive Sandi is getting; inn The Excellent S' Lawndale Fighting Championship series, Tori replaced Stacy in the Fashion Club wrestling group after she, along with Sandi and Tiffany, brutally excommunicated her from the group.

In the Daylight Legion of Lawndale Heroes fic The Hope Mission, Tori is a Legionnaire named Wildfire, one of the three most powerful Legionnaires, and appears to be composed of a deadly anti-energy form that she controls with the aid of Mark 70 quantum stabilizers; with them, she can maintain a primarily human appearance that possesses 'Tron line'-style energy emissions over her body. The number and intensity of the energy emissions varies with Tori's emotional state; the calmer she is, the fewer lines appear.

SOme fanfics even get sympathetic with Tori. In Shiva's Ethan Yeager in Lawndale and The Popular Girl Speaks Tori has a carefully hidden intelligent side and at times borders on omnicapability, and is the niece of Dallas Grimes in the former; in a Random Pairing Iron Chef challenge, Princess Pasta paired Tori up with Ronnie in To Each Their Own and has the girl depressed everyone ignores her outside of her looks and gossip; SacredDust's Stop The Presses, where Tori runs the school newspaper; and in Pasta's "Freefall", Tori is best mates with female lead Kia.

The MTV website used to have a downloadable screensaver of Popular Girl dancing next to Daria (who was not).

Retrieved from "https://dariawiki.org/w/index.php?title=The_Popular_Girl&oldid=28174"
Categories:
Cookies help us deliver our services. By using our services, you agree to our use of cookies.