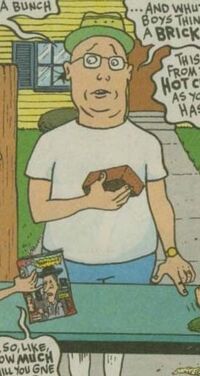 Mr Tom Anderson was an elderly resident of Highland, short-sighted and somewhat senile; he was always getting messed about with by Beavis and Butt-head, but never remembered they were the same boys that had done him wrong before. He served in both WW2 and the Korean War, and received a Purple Heart after he was wounded in the latter.

Daria was aware of him and had been to at least one occasion where he was present, but never interacted with him on screen or in the comics. She once saw Beavis and Butt-head taking advantage of him, in "Dental Hygiene Dilemma", and chided them for it - but didn't actually bother to stop them.

Anderson was a big influence on the look and voice of Hank Hill in Mike Judge's King of the Hill cartoon; both characters were based on the same elderly men in Judge's childhood, who had Texan accents and grumpy, no-tolerance attitudes.

Retrieved from "https://dariawiki.org/w/index.php?title=Tom_Anderson&oldid=26731"
Category:
Cookies help us deliver our services. By using our services, you agree to our use of cookies.