From DariaWiki
(Redirected from Upchuck)
Jump to navigation Jump to search

Charles "Chuck" Ruttheimer III is a student at Lawndale High, in Daria's class. He is largely known for his buffoon-like attempts to engender female interest - this repulsive manner has gained him the universal nickname of Upchuck.

In the script for "The Invitation", he is described as "the least popular person at the party, besides Daria and Jane. This is due to his large ears, bad haircut, and the fact that he is really quite annoying". 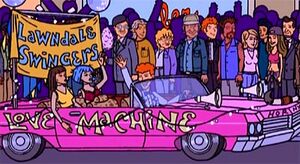 Charles "Upchuck" Ruttheimer the Third was a student at Lawndale High, in Daria's class. His chief characteristic appears to have been attempting to arouse female interest by (badly) affecting a sophisticated persona, seemingly based in part on James Bond, Playboy founder Hugh Hefner, and a distasteful parody of a bad Las Vegas comedian. For example, he often referred to females as "ladies," and always spoke the term in a salacious tone.

Interestingly, he for the most part appears to buy into his delusions of being a "Casanova". Delusions, however, is the proper term to describe his belief, as he appears to be among the least-popular students at Lawndale High, at least as far as the females were concerned. His status was confirmed by Tiffany with the brief phrase, "Upchuck? Ewww...." (See the episode Jake of Hearts.) This extends to females he encounters outside of school, including the cop from I Loathe a Parade who referred to him disparagingly as "Don Guano".

Perpetually-undeterred, Upchuck would make a sexual comment almost every time he appeared on-screen in the company of females, and would frequently deliver his catch phrase "Grrr... feisty!" in response to any insult or rejection thrown his way by women. In "Too Cute" however, it is revealed that when push comes to shove, actually chickens out, being MORTIFIED by the sheer concept behind the breast implants Daria got from Dr. Shar.

In "The Lab Brat", we find out he spies on couples making out and takes photos of them. Ewww.

Upchuck and his delightful assistant, Stacy ("Life in the Past Lane")

Other than the ladies, another of Upchuck's interests is magic. He'd perform simple tricks for shoppers at Lawndale Mall, and once pulled off an amazing disappearing act at Lawndale High, with the help of Stacy Rowe. This is the only occasion in the television series where a girl willingly worked with Upchuck.

Upchuck appears to have an aptitude towards broadcasting, as he is the PA announcer for the Lawndale Lions football team and the DJ at the school dance in "Daria Dance Party". He also showed an irreverant sense of humour in "The Daria Diaries", recording several joke answering machine messages on his father's business phone. (His father was not amused)

His father is Charles Ruttheimer the Second, who seems to own his own business. He also has two cousins, Brad and Brett, who are handsome, funny men who can attract girls - yet are shown to be on close terms with Upchuck (who they call "Chuck") and share his catchphrase. Both seem aware of his unflattering nickname. 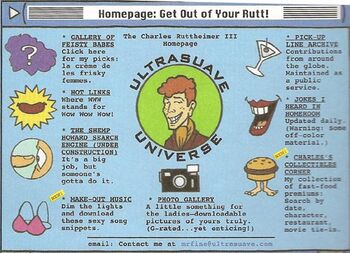 
Very little was ever revealed about Charles's personal life, as he was a secondary character founded on a stereotype, one of many comic relief devices used in the series (see also the characters Kevin Thompson and Brittany Taylor). His mother only appeared once in the entire series (in "Legends of the Mall"), and this was a faux flashback to illustrate an urban legend of Lawndale. The character portrayed as Upchuck's mother may or may not bear any resemblance to Upchuck's "real" mother and was never given a name in any case.

From both the "III" attached to his name and The Daria Diaries, we know his father's name was Charles too. In Malled, there is the implication that his father is rich; Diaries has his father as a businessman with "associates" who spent time overseas, confirming his wealth. Upchuck borrows his dad's credit card in "Malled" but manages to piss him off in "Diaries" by recording comedy answering messages on the house phone.

His two cousins appear in "Daria Dance Party". As they've come out of town just to watch him perform, intend to hang out afterwards, and share his catchphrase, he presumably has a close relationship with them. 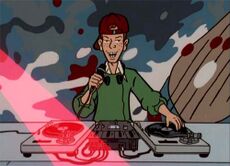 There are a couple of indications that Upchuck was smart, at least in some senses. He does well in training the mouse in "The Lab Brat", undone only by Brittany explaining the experiment instead; he also turned out to be a skilled blackmailer. In "Prize Fighters", he swiftly created his own dotcom business with trans-pacific imports simply to impress the Wizard Foundation (poking fun at how easy it is to set up a "successful" dotcom). Upchuck even competed with both Jodie and Daria in that episode, two of the smartest kids in the school, and went for tactical schmoozing in order to win over the interviewer - unfortunately for him, he sucks at schmoozing.

The Daria Diaries reveals that he maintains his own website (Ultrasuave Universe, at www.ultrasuave.com) with an archive of pick-up lines, jokes, pictures of himself, snippets of songs, and a "Gallery of Feisty Babes" (which includes Eleanor Roosevelt, noting she wasn't hot "but just you try denying she was feisty - you cannot!"). He's working on a Shemp Howard Search Engine. The links and Feisty Woman section show he's a fan of the Aeon Flux cartoon; of comedians Jerry Lewis, the Three Stooges, and Monty Python; and superhero comic books, specifically Captain Muscle. In 2000, MTV's website revealed Upchuck now owned now ran The Hubba Hubba Hub, after Ultrasuave was "destroyed by a virus slyly concealed within the now infamous SEXXXY SCULLY SNAPS attachment". The new site had different sections for different genders.

Upchuck and Daria ("The Invitation")

In both his first appearance and the later "The Lab Brat" and "Fair Enough", he called himself "Chuck". His cousins call him this as well, a sign of being close. His teachers always call him the more formal "Charles". Every student calls him "Upchuck" as standard, with Sandi Griffin once or twice calling him "Charles" to be cuttingly frosty.

Most fanfiction has gone with "Charles" instead of "Chuck", while the DVD boxset's Profiles feature went with "Chuck". 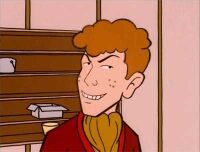 Retrieved from "https://dariawiki.org/w/index.php?title=Charles_Ruttheimer_III&oldid=27776"
Category:
Cookies help us deliver our services. By using our services, you agree to our use of cookies.