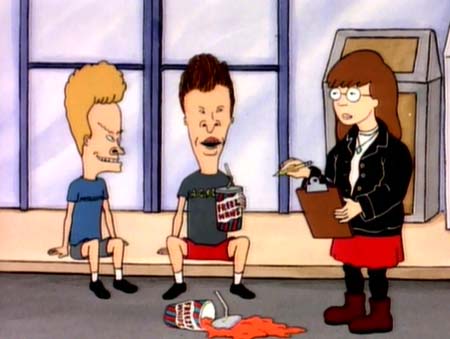 Walkathon is an episode of Beavis and Butt-head which aired on December 10, 1994.

At Highland High, Clark Cobb of the Christian Businessmen's Association is here with his "good friend" Socko (a sock puppet) to talk to the bored youths; only Daria and Stewart welcome him with applause, her sarcastically and him genuinely. Cobb tells the class about the Businessmen's charity walkathon, and informs them and Socko how Jesus Himself invented the walkathon when he walked across water. Stewart claps in awe, remarking "Socko's great!", while Butt-head raises the valid point that "Socko's got a hand up his butt".

Later on, Beavis and Butt-head have completely forgotten the walkathon exists and are instead drinking ice-cold slurpies - Beavis getting brain-freeze and calling for an uncaring Butt-head to make it stop. As he screams in pain, an amused Daria arrives: 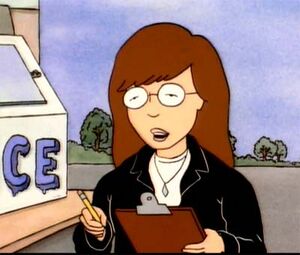 At the walkathon, Cobb tells everyone that, by walking, they're kicking Satan "in the keister" and has Socko give everyone the command to go. Beavis and Butt-head remark, quite correctly, that the speech sucked and there wasn't even a gun firing. On the plus side (or so they think as they didn't quite understand the point of the walkathon), after walking they'll be rich! "Charity is cool!" remarks Beavis, until they realise there's too many other people walking and decide to take a less crowded path... a path that wasn't closed off for the walkathon, causing them to walk through traffic, down a railway line, and generally go in completely the wrong direction and get lost. Walking, Beavis remarks, "sucks".

Finally, late at night and long past the time everyone else has finished, the buttmunches stagger to the finish line in a dreadful state. Cobb cheerfully tells them that "your friend Daria" has already finished and dropped off the fifty cents she pledged them, so now they just need to drop off the two hundred dollars they pledged her. Butt-head, confused, asks if they can have their money now. When an outraged Cobb hopes they weren't planning to skip paying, it dawns on Beavis that maybe they didn't rip off Daria after all. As Cobb's a Christian, he can't strike them - but as a businessmen, he intends to get them to walk off the debt five cents a mile.

Later into the night, Cobb driving behind them, Beavis and Butt-head continue to walk, half-dead, with Beavis threatening to kick the ass of the guy who invented the walkathon if he ever finds him. "Charity sucks!" 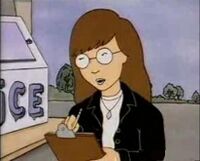 "You guys are screwed, muh-ha-ha-ha-ha!"

In "Walkathon", it looks like Daria has volunteered for something. This would be out of character in Daria, but in several Beavis and Butt-head episodes and comics she would sometimes be seen doing voluntary work; the character's apathetic nature hadn't been conceived of yet. From what we'd later learn of her parents, we can assume they forced her into some of it.

In this case, however, Daria is not just taking part, she's actively trying to get Beavis and Butt-head to do it - and as she has to know the dimwits can't pay $200, which suggests that she's trying to screw them over for a laugh.

The way she screws them over also causes problems from Clark Cobb. Based on her behaviour in Daria episodes like "Esteemsters" and "Cafe Disaffecto", we can read into this and say that Daria was forced into this and she's deliberately trying to undermine the walkathon in retaliation.

Retrieved from "https://dariawiki.org/w/index.php?title=Walkathon&oldid=26373"
Category:
Cookies help us deliver our services. By using our services, you agree to our use of cookies.