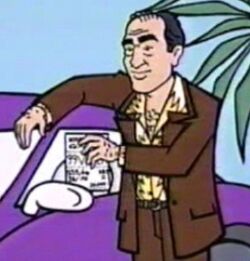 "Ken Edwards is my kinda guy!

Wally is a salesman at Honest Lee's New & Used Autos, who Jane and Brittany talked to about buying cars in "Partner's Complaint". Or rather Jane did, as Wally ignored her to flirt/sleaze on an oblivious Brittany (who remembered him as "that nice man" and asked him if they had football when he was in high school). They eventually got the car offered at $100 over dealer's cost.

Then Wally showed up at Casa Lane in "[my] hot new Vexer" - Jane never gave her the address - so he could find Brittany again. Then, later, he showed up at Pizza King to seek her out and offer her a car. You little creep, Wally.