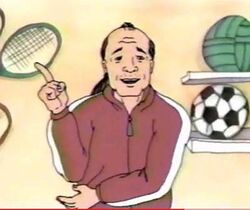 Buddy is a resident of Highland, and the proprieter of Buddy's Sporting Goods. He's a laidback, easy-going guy who seems familiar with Beavis and Butt-head and completely unbothered by their antics. In "Sporting Goods", he was their first and only port of call when they needed to buy athletic suspenders; due to the immense tinyness of their nads, he eventually gave them some eyepatches to use free of charge. He was also approached by Daria Morgendorffer, when she was forced to be fashion reported for the Highland Herald.

Buddy has been in prison, so Beavis and Butt-head think "Buddy's cool".

A rare appearance was made by Buddy in RX-87's fourth "Homeless Daria" story, where he now works as a fence in Lawndale.

Retrieved from "https://dariawiki.org/w/index.php?title=Buddy&oldid=26807"
Category:
Cookies help us deliver our services. By using our services, you agree to our use of cookies.