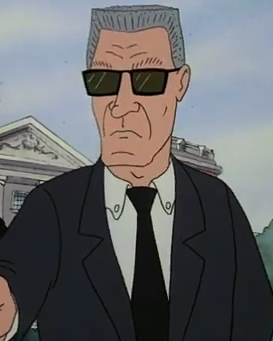 The man, the legend

ATF Agent Flemming (or Fleming) is a character from the film Beavis and Butt-head Do America, voiced by the late Robert Stack, who has been grandfathered into Daria by fanfic writers.

An uncompromising badass with a cavity search obsession, he's one of the top men in the Bureau for Alcohol, Tobacco, and Firearms. Somehow, the X-5 bioweapon fell within his remit. He spent the movie tracking Beavis and Butt-head, believing them to be terrorist masterminds, and later believed they were patriotic heroes; apart from these two lapses, he appears to be intelligent and competent. Arms dealers Dallas and Muddy Grimes are old enemies of his.

Flemming met Daria Morgendorffer in his quest for X-5: she was in a summer class of Mr. Van Driessen's which got raided by the ATF. Daria may or may not have been cavity searched, and we all hope not.

Flemming, as with other Beavis and Butt-head concepts and characters, is often used in Daria fanfic; so are his sidekicks, Agent Bork and the heavyset, cavity-performing woman Agent Hurly.

Fanfiction they've been in include:

The film came out in 1996. In 2002, the ATF became the Bureau for Alcohol, Tobacco, Firearms, and Explosives (but is still abbreviated as "ATF") and was moved from the Department of the Treasury to the Department of Justice.

Retrieved from "https://dariawiki.org/w/index.php?title=Agent_Flemming&oldid=28651"
Category:
Cookies help us deliver our services. By using our services, you agree to our use of cookies.