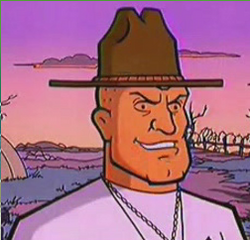 Corporal Ellenbogen was an instructor at Buxton Ridge Military Academy. According to Ruth Morgendorffer, Ellenbogen has only one thumb.

He is referenced by Jake in same episodes: according to him, he had to learn to shave from Ellenbogen (Jake of Hearts) and Jake still holds a grudge on him for rejecting a (bad) song Jake had composed for the school musical (The Story of D). More importantly is Jake's memories of what he described as his abusive behavior, including a flashback of what is probably Ellenbogen leaving him halfway up a climbing rope and mocking his obvious distress (Of Human Bonding).

The corporal appears to be one of the sources of Jake's recurring nightmares, to the extent that when he wakes up yelling (Sappy Anniversary), Helen reassures him that Ellenbogen is far away.

Ellenbogen rarely appears directly portrayed in fanfiction. It is more common for him to be referenced in connection to Buxton Ridge or for his treatment of Jake. Lawndale Fighting Championship refers to a notorious wrestling academy named for him. In "Where's Mary Sue When You Need Her?", the antagonist impersonates the man's son.

Retrieved from "https://dariawiki.org/w/index.php?title=Corporal_Ellenbogen&oldid=26344"
Category:
Cookies help us deliver our services. By using our services, you agree to our use of cookies.