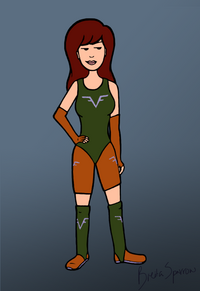 There have also been a couple of Iron Chef entries written in this universe. These stories aren't part of the official LFC canon, but some elements (such as the Axl's Piercing Parlor interview segment) have been stated as canon elements. They are:

There is also one issue of a "dirt sheet", The SSW Observer, reporting on insider news in the world of the LFC.

A non-canon one-shot titled Nurse Goodnsexy Opens a Can of Whup-Ass! features Tom going under disguise as his infamous Nurse Goodnsexy character and ambushing Upchuck as revenge for a previous attack.

The fighter roster consists almost entirely of Lawndale High students (the only exception being Tom Sloane). Thus, a lot of background and one-shot characters are given full names (most derived from other fics, some original) and gimmicks and are used extensively. References are made to an unnamed developmental system (similar to WWE's Florida Championship Wrestling), in which new fighters are trained in preparation for their eventual call-up to the main roster. Occasionally, these fighters appear in non-televised matches that occur before TV and PPV tapings, or even the occasional Friday Night Fights match. So far, The Head, Donna, Shane, Rob and Cindy are the only fighters that have been explicitly named as former developmental talents. 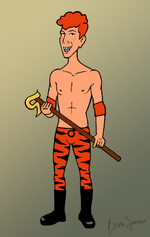 The author stated that he wanted to do an invasion-based story as part of Esteemster Series, similar to that of WWE's The Nexus in 2010, and sought suitable original fanfiction characters to form an invading group. The only provision was that they had to be school-aged in their origin fic.

Quinn Morgendorffer and Stacy Rowe were originally members of The Fashion Club, but both would later end up out of the group. Stacy was brutally ejected by Sandi, Tiffany and her subsequent replacement in the group, Tori Jericho, before the Lawndale Rumble, while Quinn would gradually grow distant from the rest of the group, cementing her departure during the Lawndale Rumble by disobeying Sandi's order to eliminate herself from the match. Brittany Taylor was a member of The Cheerleader Squad, but amicably departed the group before Is It 'Mania Yet? to focus on her singles career, leaving Angie Zammit as the de facto leader. LaToya Jones and Aleesha Nibblett had previously been a tag team, but broke up at Esteemster Series. A majority of the show's adult characters serve in other roles:

Other young characters have also appeared at times:

There are currently 7 LFC championships, as well as the Stairway To Heaven contract. Previous holders have been listed based on information given in Lawndale Rumble, Is It Mania Yet?, Esteemster Series and Something Something Slam (including teasers).

There is also the Stairway To Heaven Contract, won in ladder matches: Holders of the contract can claim one World Championship match any time within 12 months of winning it. This is based on WWE's Money in the Bank concept. 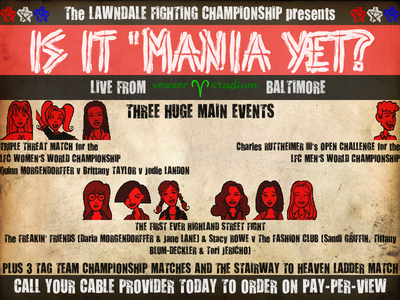 Retrieved from "https://dariawiki.org/w/index.php?title=Lawndale_Fighting_Championship&oldid=28197"
Categories:
Cookies help us deliver our services. By using our services, you agree to our use of cookies.