Inspired by Richard Lobinske's ficlet on PPMB, this fic is actually a pair of viginettes (originally posted by Brother Grimace on PPMB) which portrays Bump the cat as a Gou'ald System Lord from the Stargate film and television franchise. In this fic, Daria and Jane are seen as servants of Bump; however, Jane (in her usual fashion) has managed to make the best of her situation and has become Bump's favorite, because she knows how the cat likes to have her stomach rubbed.

Daria is less thrilled about her situation; she is not allowed underwear, has Egyptian-styled outfits to wear, and is compelled to pre-chew salmon for Bump to eat (is is implied that this is meant as a punishment for Daria's constant sarcasm and open disagreements with Bump on several issues regarding the cat's plans for galactic conquest).

The fic can be found here at the Contrarian's Corner. 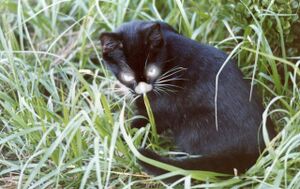 Bump as a System Lord
Retrieved from "https://dariawiki.org/w/index.php?title=Bump,_The_System_Lord&oldid=17195"
Category:
Cookies help us deliver our services. By using our services, you agree to our use of cookies.